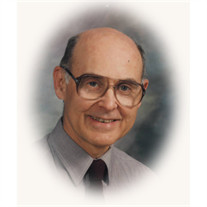 William McKenzie Lundie, formally of Washington Township, Apollo, PA, passed away on Friday, September 4, 2020 at the Masonic Village in Elizabethtown, PA. He was born March 8, 1936 in Yonkers, NY to William J. and Margaret M. Lundie. William graduated from New York University in 1958 with a degree in chemistry and later from George Washington Medical School in Washington, D.C. in 1962. He served his internship at Akron General Hospital in Akron, Ohio and then spent two years in the US Air Force in Duluth Minnesota where he was Hospital Commander during his last three years. William then did his residency in Internal Medicine at the VA Hospital in Washington D.C. He began his medical practice at the Miner's Clinic in New Kensington and Apollo, PA in 1968 before starting his own practice in Vandergrift, PA in 1989 until his retirement in 1995. During his retirement, William enjoyed making wine, gardening, and spending the winters in Shallotte, NC, where he volunteered teaching math in the elementary school. He was a member of the Apollo Masonic Lodge in Apollo, PA and had a dual membership in the Shallotte Masonic Lodge. He was also a member of the Sudan Shriners there. William is survived by his wife Juanita (Nita); a daughter, Bethany Rouland; a grandson, William Rouland; and several cousins. He was preceded in death by his parents and daughter, Ellen. If desired contributions may be made to a charity of choice or: Cystic Fibrosis Foundation, 600 Waterfront Drive #223, Pittsburgh, PA 15222. No Services are scheduled at this time.

The family of William McKenzie Lundie created this Life Tributes page to make it easy to share your memories.