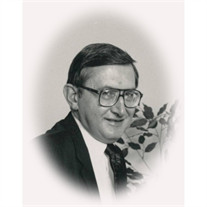 William E. Eby, 84, of Mount Joy, passed away at home among family on Friday, January 29, 2021. Born in Lancaster, he was the son of the late Charles and Nora (Strickler) Eby. William was a devoted husband to Janet (Risser) Eby for over 50 years.                A proud graduate of the last class of the former Mount Joy High School in 1954, "Bill" served in the United States Army from 1956 to 1958.  During his service, he was stationed in Heidelberg, Germany, where he served as a machine accounting specialist decoding reports from U.S. Spies in Eastern Europe. After his discharge from the US Army, Bill was hired by the Union National Bank, Mount Joy as a bookkeeper in 1958. A company man from the onset of his employment, Bill never filled out an application and quickly moved up the professional ranks at the bank, a career that spanned over 40 years. In 1984, he was appointed President and Chief Executive Officer of Union National. During his tenure with the Union National Bank, he was instrumental in the bank's growth, and upon his retirement in 1998, Union National posted net profits of 2.04 million dollars.               Bill enjoyed sharing the outdoors and spending time at his second home, affectionately known as the "Perry County Hilton." There, he and Janet shared many special memories with their grandchildren, great-grandchildren, and friends. During his younger years, Bill enjoyed hunting, but later in life, he would become an avid fly fisherman, fishing small mountain creeks and streams for native brook trout. He was a member of the Donegal Fish and Conservation Association and a member of the Elizabethtown Beagle Club, where he would enjoy spending time with his buddies. A fan of Major League Baseball, he was an Oakland A's fan and enjoyed watching their games. He was a lifelong member of St. Mark's United Methodist Church in Mount Joy and the Kennedy Valley Church of God, Landisburg.                Surviving in addition to his wife, Janet, are three children, Linda Adams, companion of Ian Tomlinson of Manheim, Kevin W. Eby, husband of Michaele of Mount Joy, and LuAnn Billett, wife of Dr. Craig Culbert of Lititz; five grandchildren; four great-grandchildren; and a brother, Donald Eby of Philadelphia.                Services will be private. In lieu of flowers, memorial contributions may be made to St. Mark's United Methodist Church, 37 East Main Street, Mount Joy, PA 17552. To send an online condolence, please visit www.sheetzfuneralhome.com

William E. Eby, 84, of Mount Joy, passed away at home among family on Friday, January 29, 2021. Born in Lancaster, he was the son of the late Charles and Nora (Strickler) Eby. William was a devoted husband to Janet (Risser) Eby for over 50 years.... View Obituary & Service Information

The family of William E. "Bill" Eby created this Life Tributes page to make it easy to share your memories.