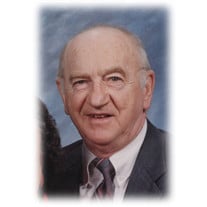 Thaddeus "Ted" Edward Dalkiewicz, 92, of Marietta, passed away on Sunday, March 22, 2020, at Paramount Senior Living in Maytown. Born in Nanticoke, PA, he was the son of the late Michael and Celia (Sendor) Dalkiewicz. Ted was the husband of Marie "Catherine" (Koor) Dalkiewicz with whom he celebrated 71 years of marriage on January 29th.  Nanticoke High School graduated him a semester early so he could leave to serve his country. He continued to further his education by mail order earning the equivalency of 2 years of college and rapid promotion to "youngest 1st Sgt" in the United States Marine Corps. He proudly served for 22 years during  World War II, Korean War and Vietnam War. During World War II, Ted was in the Pacific and Army of Occupation of China. After the war, he served in New York City where he tracked down his faithful penpal and married her - Catherine. He rose to the rank of First Lieutenant during the Cuban Crisis and Korea. He also served at Quantico VA, Camp Lejeune NC Pensacola FL, Pottsville PA and lastly in Columbia PA as First Sergeant of the Reserve Marine Unit. He retired at his highest honorable rank of 1st Lieutenant.  He moved his family to the Marietta countryside and worked as a Metropolitan Life Insurance agent for over 15 years before "retiring" to school-bus driver for the Catholic schools in Columbia, rural Mailman for the Marietta Post Office and caretaker for "the farm". Ted was a daily communicant and faithful member of Mary Mother of the Church Parish in Mount Joy. In 1995 he helped with the merging of the Assumption of the Blessed Virgin Mary Catholic Church in Mount Joy and the Presentation of the Blessed Virgin Mary Parish in Marietta to form Mary Mother of the Church Parish. Ted served in many ways; as a Lector, on the finance committee, as President of the parish council, as an acolyte for funerals, on the Holy Name Society, as a Eucharistic minister, as an organizer for the annual BBQ and helped with maintenance at the churches. Because of his ever-presence, he was affectionately called "Fr. Ted" by some of the parishioners. Ted was also a member of the Knights of Columbus Council #867, American Legion Post 466 Marietta, Catholic War Vets and served on the Lancaster Catholic School Board.  As a young father, Ted volunteered as a Cub Scout leader and was an avid fan of the sporting activities of his children. Ted was a man who treated his entire family to various church dinners and picnics. He took the family to an annual week-long retreats beach-side at the Marianist Family Life Program in Cape May Point NJ. Never idle or afraid to tackle a project or help someone in need, he was a DIY guy decades before the term was popular and taught his children the value of hard work and generosity. As "Santa's Helper" he brought joy to hundreds of children ( including his own) over the years. He had amazing patience untangling countless knots when teaching his children how to fish. He enjoyed watching Notre Dame and Penn State football,  stamp and coin collecting, fishing, watermelon, auctions, puzzles and telling entertaining "Marine Corps" stories. He will be greatly missed. Surviving in addition to his wife, Catherine, are six children, Thaddeus J. Dalkiewicz, husband of Debra of Harrisburg, Teresa M. Via, wife of Gary of Marietta, Anny C. Wilhelm, wife of Mark of Wrightsville, Helene M. DeRose, wife of James of Suisun, CA, Thomas M. Dalkiewicz, husband of Carol of Mount Joy, and Rita A. Rice, wife of Douglas of Marietta. Also, surviving are seven grandchildren and seventeen great-grandchildren.  He was preceded in death by four brothers and a sister.   Unfortunately, due to health concerns with the coronavirus (COVID-19), the family will be postponing Ted's Mass of Christian Burial and will make an announcement at a later date. Mass cards and flowers are appreciated or memorial contributions may be made to St. Jude Children's Research Hospital, PO Box 1893, Memphis, TN 38101-9950.

Thaddeus "Ted" Edward Dalkiewicz, 92, of Marietta, passed away on Sunday, March 22, 2020, at Paramount Senior Living in Maytown. Born in Nanticoke, PA, he was the son of the late Michael and Celia (Sendor) Dalkiewicz. Ted was the husband of... View Obituary & Service Information

The family of Thaddeus "Ted" Edward Dalkiewicz created this Life Tributes page to make it easy to share your memories.