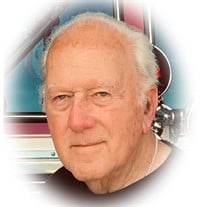 T. Larry Musser, 81, of Masonic Villages, went to be with the Lord on Friday, February 22, 2019 with his family by his side. Born in Elizabethtown, he was the son of the late Oscar and Emma (Flory) Musser.                 Larry was a graduate of Hershey High School. He proudly served in the United States Army. Larry retired from Wilbur Chocolate. He enjoyed driving his Ford truck and riding his Harley Davidson. Most of all, Larry cherished the time he spent with his family especially his grandchildren.                 Larry is survived by three daughters, Sherry Davis of Hummelstown, Laurie Heller of Nashville, TN and Kerry Barlup, wife of Randy of Marysville. Also surviving are five grandchildren, Bryce, Dagen, Thane, Joshua and Kali; three brothers, Richard, Charles and John Musser all of Elizabethtown; and three sisters, Mary Walters of Elizabethtown, Shirley Shay of Mount Joy and Sandra Kise of Elizabethtown.                   His siblings that have gone before him are three brothers, Edwin, Oscar James and Leonard Musser and four sisters, Ruth Lawrence, Julia Urban, Catherine Lawrence and Gertrude Junk.                 A funeral service honoring Larry's life will be held at the Sheetz Funeral Home, Inc. 16 East Main Street, Mount Joy on Tuesday, February 26, 2019 at 11 AM. Family and friends will be received at the funeral home before the service from 9 AM to 11 AM. Interment will follow at Stauffers Mennonite Cemetery, Hershey. In lieu of flowers, memorial contributions may be made to Masonic Villages Hospice, 98 Masonic Drive, Suite 101, Elizabethtown, PA 17022.

The family of T. Larry Musser created this Life Tributes page to make it easy to share your memories.