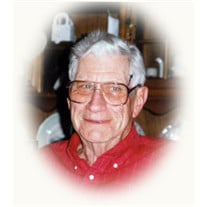 Stephen F. "Pete" Hopper, 96, died on September 5, 2017, at Pleasant View Retirement Community.  A handful of words are hard pressed to convey the essence of this beloved gentle man and his well-lived life. Born in Berkshire Valley, NJ, on October 24, 1920, Pete was the only surviving child of S. Frank and Ella Taylor Hopper.  A sister, Catherine Irene, and a brother, Robert James, died in infancy. Having lost his father when he was just 16, Pete was a devoted son to his widowed mother.  His beloved wife, Helen, died in 2012. Surviving children are Ruthann C. Dwyer (widow of J. Thomas); Stephen F. Hopper Jr. and his wife, Lisa Heidi; and Irene L. Hopper.  Pete is also survived by 3 grandchildren:   Jonathan A. Dwyer and his wife, Erin; Laura T. Hopper Gibbs and her husband, Paul; and Benjamin A. Hopper.  Over his many years, Pete loved and took care of many dogs, cats, chickens, and a Canada goose named Jacques. Pete was a 1939 graduate of Wharton High School. He graduated from an apprenticeship as a tool and die maker at Picatinny Arsenal in Dover, NJ. Though he voluntarily enlisted in the U.S.  Navy during WWII, he was reassigned to the Army the next day and served his country supporting the war effort as a toolmaker and living at home. Pete retired from the Arsenal in 1974 and was caretaker of two cemeteries and had a small lawnmower and tractor repair business until moving to Mount Joy in 1986. Pete's lifelong passions were his family and his church. When living in New Jersey, Pete was active in the Berkshire Valley Presbyterian Church, serving as trustee, elder, usher, Sunday School teacher and superintendent, and cemetery caretaker for many years. After moving to Mount Joy, Pete attended the Donegal Presbyterian Church, finally transferring his membership in 2010, at the age of 90. His deacon, Steve Douple, faithfully visited and always brought good cheer and laughter. Pete was a tease with a twinkle in his eye, a good man who accepted life's challenges, doing whatever he needed to do and always with a smile. He left his children and grandchildren a legacy of contentment, acceptance, kindness, selflessness, humor, gentleness, wisdom, familial responsibility, devotion, and, most of all, love. We could want for nothing more. A celebration of Pete's life will be held at Donegal Presbyterian Church, 1891 Donegal Springs Road, Mount Joy, PA, at 11:00 a.m, on October 14, 2017, with the Reverend Matthew Randolph officiating. Inurnment will be in the family plot in the Berkshire Valley Presbyterian Church Cemetery at the convenience of the family. Pete's family would like to publicly thank the staff at Pleasant View, especially all of his "girls," for their loving care.

Stephen F. "Pete" Hopper, 96, died on September 5, 2017, at Pleasant View Retirement Community.  A handful of words are hard pressed to convey the essence of this beloved gentle man and his well-lived life. Born in Berkshire Valley, NJ, on... View Obituary & Service Information

The family of Stephen F. "Pete" Hopper created this Life Tributes page to make it easy to share your memories.