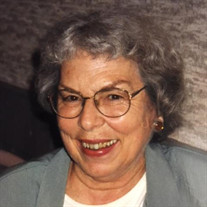 Shirley Trimmer, formerly of Elizabethtown, passed away April 19, 2022 at Homestead Village. She was the daughter of Henry Brenneman Heisey and Wilhelmina (Rohrman) Heisey and was the widow of Robert M. Trimmer. Shirley graduated from East Donegal High School in 1947. She met her husband, Bob Trimmer, at Elizabethtown College while enrolling in classes for her freshman year. The two quickly became inseparable. Shirley and Bob married in 1952, and had three children. After her husband’s death in 1967, Shirley went back to Elizabethtown College and earned her Bachelor of Science in Education, while parenting her three children. She taught elementary school, primarily third grade, at Maytown Elementary, in the same building she had attended high school. She spoke fondly of her many students over the years, and how she had enjoyed teaching. She retired in 1991, having taught for 21 years. Shirley enjoyed classical music, played flute in high school, and was a skilled pianist. She was an avid reader. She gardened, sewed, and played pinochle with a group of friends for many years. She traveled cross country several times with her daughter and also took many trips with her sister and brother-in-law. She delighted in her four grandchildren. Shirley is survived by her three children, Sandra Flanagan and partner Glenn Bradley of West Hempfield, Stephen Trimmer of Upper Darby, and Barbara Whedon and partner Donald Zerfoss of Ephrata; four grandchildren, Robert Whedon, Rebecca Whedon, Jacob Trimmer, husband of Lauren, and Brianna Trimmer; and sister-in-law Janet Trimmer. In addition to her parents and husband, she was preceded in death by her brother William Heisey and sister Mary Shellenberger. A memorial service honoring Shirley’s life will be held at the Elizabethtown Church of the Brethren, 777 S Mt Joy St, Elizabethtown, PA 17022 on Sunday, May 15, 2022 at 2 PM. Family and friends will be received at the church following the service. Interment will be private. In lieu of flowers, memorial contributions may be made to www.brightfocus.org, which funds research for Alzheimer’s and macular degeneration, or the Elizabethtown Library.

Shirley Trimmer, formerly of Elizabethtown, passed away April 19, 2022 at Homestead Village. She was the daughter of Henry Brenneman Heisey and Wilhelmina (Rohrman) Heisey and was the widow of Robert M. Trimmer. Shirley graduated from East Donegal... View Obituary & Service Information

The family of Shirley A. Trimmer created this Life Tributes page to make it easy to share your memories.