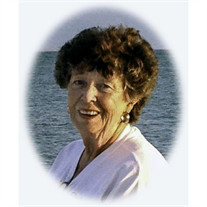 Shirley A. Sears, 81, of Lancaster, passed away on Wednesday, April 7, 2021 at Lancaster General Hospital after a brief illness. Born in Lancaster, she was the daughter of the late Jay and Evelyn (Washstetter) Koser. Shirley was the wife of the late Lawrence P. Sears who passed away on November 3, 2014.                 Shirley retired from Kellogg's. Previously she worked at various restaurants as a waitress. After her retirement, Shirley volunteered at Landisville Elementary School in the art department. The time she spent working with the children was very special to her. She also volunteered at the Longs Park Art Festival. Shirley enjoyed traveling and especially making trips to her vacation home in Rehoboth Beach. Shirley was "rescued" by her rescue cat, Sandy. Most of all she enjoyed spending time with her children and grandchildren.                 Shirley is survived by two children, Terry Way, husband of Cheri of Elizabethtown and Kathy Gainer, wife of John of Lancaster; a step-daughter, Cindy Gochnauer, wife of Karl of Mountville; four grandchildren, Rebecca Sears of Lancaster, Johnny Gainer, husband of Spencer Nendza of Philadelphia, Adam Way of Elizabethtown, and Joshua Sears of Lancaster; and a brother, Herbert Stahl, husband of Susan of Wernersville.                 She was preceded in death by two stepchildren, Lisa and Michael Sears; a sister, Joan Bryan; and a brother, Robert Koser.                 A funeral service honoring Shirley's life will be held at the Sheetz Funeral Home, Inc., 16 East Main Street, Mount Joy on Tuesday, April 13, 2021 at 11 AM. Family and friends will be received at the funeral home before the service from 10 AM to 11 AM. Interment will follow at Laurel Hill Memorial Gardens. In lieu of flowers, memorial contributions may be made to Trinity Evangelical Congregational Church, 100 New Haven St, Mount Joy, PA 17552 or the Columbia Animal Shelter,  265 S 10th St, Columbia, PA 17512.

Shirley A. Sears, 81, of Lancaster, passed away on Wednesday, April 7, 2021 at Lancaster General Hospital after a brief illness. Born in Lancaster, she was the daughter of the late Jay and Evelyn (Washstetter) Koser. Shirley was the wife of... View Obituary & Service Information

The family of Shirley A. Sears created this Life Tributes page to make it easy to share your memories.

Shirley A. Sears, 81, of Lancaster, passed away on Wednesday,...