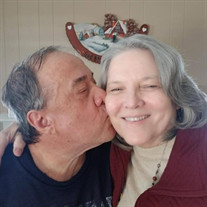 Sharon A. Schatz, 71, of Middletown, passed away on Tuesday, January 11, 2022 at UPMC Community Osteopathic Hospital. Born in Baltimore, MD, she was the daughter of the late David O. and Jane Naomi (Patterson) Hawley. Sharon was the wife of David T. Schatz with whom she celebrated 21 years of marriage. As a mother, wife, sister, and grandmother Sharon was loving, kindhearted, patient, and compassionate. She always made her friends and family feel loved and supported. As a mother, wife, and grandmother, she was gentle and nurturing: always putting others before herself. Her love for her husband David was unmatched in its devotion and adoration. As was her love for the Lord. She was an artist and musician, in both areas she was just as careful and loving. She passed on her artistic skills and techniques to both of her grandchildren, Maddie and Jaxen who also find happiness in creating beautiful things. She also passed down her musical talent to her grandson Jaxen. She was a talented auto harpist who played with her best friend and sister Linda. They played together with great joy and always had lots of laughs. To David, she was a devoted and loving wife and one of her greatest joys was sharing a laugh with her husband. To Corey and Keilah she was the most wonderful mother and friend. She was a faithful follower of Christ. Surviving in addition to her husband David, are two children, Corey R. Lenherr of Middletown and Keilah Russo, wife of William of Harrisburg; two grandchildren, Madison A. Russo and Jaxen E. Russo; two brothers, William Hawley, husband of Jeanie of Perryville, MD and Wayne Dubree of Aberdeen, MD; and a sister, Linda Willis of Middletown. Services will be private.

Sharon A. Schatz, 71, of Middletown, passed away on Tuesday, January 11, 2022 at UPMC Community Osteopathic Hospital. Born in Baltimore, MD, she was the daughter of the late David O. and Jane Naomi (Patterson) Hawley. Sharon was the wife of... View Obituary & Service Information

The family of Sharon A. Schatz created this Life Tributes page to make it easy to share your memories.