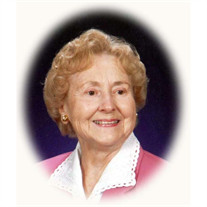 Ruth H. Johnson, 94, of Elizabethtown, PA, formerly of Altoona and Mount Joy, PA passed peacefully away on Wednesday, May 24, 2017 at Masonic Village Health Care Center after a brief illness. Born in Oakmont, PA, she was the daughter of the late Earl J. and Anna (Hauth) Haverstick and wife of the late Robert G. Johnson Sr., who passed away May 25,1994. They were married for 48 years. Ruth graduated from Altoona High School in 1940 and Gettysburg College in 1944 with a BA in Chemistry. While there, she was a member and officer of Chi Omega Sorority, Lit and News editor of the Gettysburgian, and active in Vespers Choir. She worked briefly as a chemist for Armstrong Cork Co. in Lancaster during WWII engaged in research for synthetic rubber. Upon marrying, she returned to Altoona and was a bookkeeper for Jacob Motor Co. After securing her teacher certification, she taught second grade at Pleasant Valley Elementary School for 27 years until retirement in 1987. In 1987, she was nominated for PA teacher of the year. In 1993, she received the YWCA "Most Outstanding Woman of the Year" award. Long devoted to civic and professional endeavors, she was active in the Altoona Adult Literacy Program, "Serve Our Schools Committee", Altoona Woman's Club, Altoona Symphony League, Blair County Arts Foundation and the Woman's League of Gettysburg College. She was awarded membership in Phi Delta Kappa and Alpha Delta Kappa International Honors Societies for outstanding educators. Family, church, and community were the focus of her life. Ruth was a former member of Christ Second Lutheran Church in Altoona where she was active in Church Council and as a Sunday school teacher. Later she became a member of St. Mark's United Methodist Church, Mount Joy and was involved in Dorcas Society, Link, Christian Women, Travelers, and small group. Most recently, she was active in Sell Chapel at the Masonic Villages. Ruth is survived and greatly missed by a son Dr. Robert G. Johnson Jr. and spouse Dr. Margaret Liu of Lafayette, CA, a daughter Dr. Janice R. Johnson and spouse Dr. Edward Kassab of Mount Joy, five grandchildren Christine Houston Kassab and spouse Sarah, Dr. Emily Kassab, Laura Kassab, and Matthew and Ariana Johnson and 2 great grandchildren. In addition to her husband and parents Ruth was preceded in death by a sister Alice Louise. Relatives and friends are respectfully invited to attend Ruth's Memorial & Life Celebration Service at St. Mark's United Methodist Church, 27 East Main Street, Mount Joy, PA with the Rev. Timothy Smith officiating on Friday, July 21, 2017 at 11:30 am. The family will receive friends at St. Mark's Church from 10:30 am till the time of service. Interment will be private at Alto Rest Cemetery, Altoona PA. In lieu of flowers, memorial contributions may be made to St. Mark's Faith Factory Learning Center Scholarship Fund, 37 East Main Street, Mount Joy, PA  17552 or Altoona Area School District (AASD) Foundation 1415 6th Avenue Altoona, PA 16602 or Masonic Villages at Elizabethtown, Masonic Village Office of Gift Planning, One Masonic Drive Elizabethtown, PA 17022.

Ruth H. Johnson, 94, of Elizabethtown, PA, formerly of Altoona and Mount Joy, PA passed peacefully away on Wednesday, May 24, 2017 at Masonic Village Health Care Center after a brief illness. Born in Oakmont, PA, she was the daughter of the... View Obituary & Service Information

The family of Ruth H. Johnson created this Life Tributes page to make it easy to share your memories.