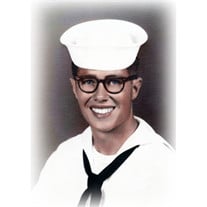 Robert Lee Shireman, 79, of Mount Joy passed away peacefully on Friday, December 13, 2019. He was the devoted husband of Drema England Shireman. He will be missed by his four children; John (Michelle) Shireman, Abby (Tim) Rush, Kim Smith, and Tara (Jerome) Lutz and his grandchildren, Justin, Meredith, Sydney, Bailey, Ashton, Dane, Luke, and Drew, and a great-granddaughter Paisley. Bob was a graduate of Donegal High School, class of 1958. Following graduation, he enlisted to serve in the US Navy. In 1959, he was assigned to serve with "Patrol Squadron 45" based in Bermuda, which supported aircraft with sensitive tracking and search electronics to protect the Eastern US. He was a graduate of Elizabethtown College earning a BS degree in Accounting. During his career, he worked for several companies in West Virginia, South Carolina, Pennsylvania and in England. After his retirement, he enjoyed working part-time at the Giant Food Store in Mount Joy. Bob was an ardent and passionate Eagles fan. He enjoyed playing cards with his good buddies Bruce, John, Mike, and Jim.  They will be saddened to see his empty seat at their monthly card game. Born in Columbia, Bob was the son of the late John Robert and Anna Elizabeth Kise Shireman. He is also survived by his siblings, Linda (Brad) Early, Carol (Frank) Lucas, John David (Connie) Shireman, Barb Woods, and Denny Shireman. A Memorial Service honoring Bob's life will be held at Reich's E. C. Church, 338 Stackstown Rd, Marietta on Friday, December 20th, at 11 AM. Friends will be received immediately following the service.  Donations in his memory to Reich's EC Church, 338 Stackstown Road, Marietta PA 17547 would be deeply appreciated. Online condolences may be directed to www.sheetzfuneralhome.com. Sheetz Funeral Home, Inc. Mount Joy

Robert Lee Shireman, 79, of Mount Joy passed away peacefully on Friday, December 13, 2019. He was the devoted husband of Drema England Shireman. He will be missed by his four children; John (Michelle) Shireman, Abby (Tim) Rush, Kim Smith, and... View Obituary & Service Information

The family of Robert Lee Shireman created this Life Tributes page to make it easy to share your memories.