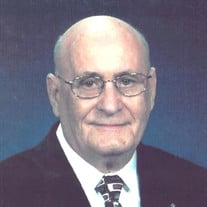 Richard E. “Dick” Price, 92, of Bainbridge, passed away on Tuesday, November 16, 2021 at Masonic Village, Elizabethtown. Born in Blain, PA, he was the son of the late Edgar and Mabel (Watts) Mayers. Dick was the loving husband of Shirley (Drescher) Price with whom he celebrated 67 years of marriage this past August 14th. Dick proudly served in the United States Navy Reserve and later was drafted into the United States Army. He retired from Donegal Industries as a pattern maker. Dick was an active member of St. Luke’s Evangelical Lutheran Church in Bainbridge. He was a life member of both the VFW and the American Legion Libhart-Dyer Post 197 in Bainbridge where he was also Past Commander. A Free and Accepted Mason, he was a life member of the Ashara-Casiphia Lodge #551 in Mount Joy. He was also a member of the Lancaster Lodge of Perfection and the Harrisburg Consistory. Dick was a Past Master of the Ashara Lodge 398 before the merger. He was a self-taught stained-glass artist. Dick repaired two windows at St. Luke’s Evangelical Lutheran Church. He cherished the time he spent with his children, grandchildren, and great grandchildren. Surviving in addition to his wife, Shirley, are two children, Rick Price, husband of Nancy (Leninger) of Lititz and Ronald Price PM of Bainbridge; two grandchildren, Aarin Deibler, wife of Doug of Landisville and Addam Price, husband of Louise (Uffindell) of South London, UK; and three great grandchildren, Nathanial, Sofia, and Joshua Deibler. He was preceded in death by a brother, Larry Mayers, and two sisters, Loretta Bradley and Loraine Kanoff. A funeral service honoring Dick’s life will be held at St. Luke’s Lutheran Church, 106 North 2nd Street, Bainbridge, PA 17502 on Monday, November 22, 2021 at 12 noon. Family and friends will be received at the church before the service from 10:30 AM to 11:45 AM. Masonic Rites will be held at the church at 11:45 AM. Interment will follow the service at Bainbridge Cemetery. In lieu of flowers, memorial contributions may be made to St. Luke’s Evangelical Lutheran Church (address above).

Richard E. &#8220;Dick&#8221; Price, 92, of Bainbridge, passed away on Tuesday, November 16, 2021 at Masonic Village, Elizabethtown. Born in Blain, PA, he was the son of the late Edgar and Mabel (Watts) Mayers. Dick was the loving husband of... View Obituary & Service Information

The family of Richard E. "Dick" Price created this Life Tributes page to make it easy to share your memories.