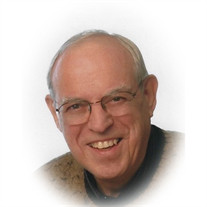 Richard Arthur Lambert of Lancaster died peacefully on December 31, 2018, at St. Anne's Retirement Community in Columbia.  He was 90 years old and had been a resident in the Memory Unit for several years.  Richard was born October 3, 1928 to Evelyn C. and Arthur J. Lambert in Biddeford, Maine.  He attended St. Louis High School in Biddeford and graduated from University of Maine at Orono in 1952 with a B.S. in Mechanical Engineering.  He then served active duty as a Radio Mechanic with the rank of corporal in the United States Marine Corps from 1952-1954 at Camp Lejeune, NC and followed this by serving in the Marine Corps Reserve until 1960. He married Betsy Bigler of Mount Joy in 1956 and they had three children, Jordan, Amy, and Kevin.  Mr. Lambert enjoyed a long career as an engineer. While working for RCA, ITT and then Dumont Corp. from 1958-1960 he and his growing family relocated frequently, living in Fort Wayne, IN, Roanoke, VA, and Livingston, NJ.  The family settled in Lancaster in 1964 when Richard returned to RCA.  During his tenure at RCA as a lead engineer developing production lines for color television picture tubes, his work took him around the globe.  In 1988 he was awarded a U.S. Patent for his work.  He retired from RCA (which had become part of Thomson Consumer Electronics) in 1994.  Richard was a long-time member of St. Thomas Episcopal Church in Manheim Township where he served for many years as an usher and served as Leader of Cub Pack 46 for a few years.  Richard was an avid and active volunteer in Lancaster.  He joined the Wheatland Sertoma Club in 1965 and became a lifetime member in 1968.  During four decades with Sertoma, he was often recognized for outstanding service and held many leadership positions.  He was Secretary of Wheatland Sertoma for over 25 years, served as Club President 1968-1969 and received numerous awards.  At the district level he was Secretary-Treasurer 1975-1977 and District Governor 1994-1995.  He served as Pennsylvania State Director 1995-1996 and held several other regional offices.  He was elected a Sertoma International Director from 1997-1999.  Richard also volunteered for the Lancaster County Public Library Book Resort and Book Sales; he was a Volunteer docent for the North Museum; and volunteered for many years for Lancaster Meals On Wheels.  Betsy, his wife of 61 years, predeceased him in 2017.  Richard is survived by his three children: Jordan Lambert (wife Karen Feldt), Amy Ditzler (husband Steve Ditzler) and Kevin Lambert, all of Lancaster; two grandchildren: Theodore Schell-Lambert (wife Zoe Vanderveer) of Boulder, CO, and Rachel Schell-Lambert of New Orleans, LA; and two great-grandchildren.  Additionally, his two younger brothers Julian (wife Doris) of Biddeford, ME, and Roger of Vallejo, CA, survive him. A memorial service will be held Saturday, January 19, 2019 at 10:30 AM at St. Thomas Episcopal Church, 301 St. Thomas Road, Lancaster. In lieu of flowers the family suggests donations to the Schreiber Center for Pediatric Development, 625 Community Way, Lancaster, PA 17603; the North Museum, 400 College Avenue, Lancaster, PA 17603; or St. Anne's Retirement Community, 3952 Columbia Avenue, Columbia, PA 17512.

Richard Arthur Lambert of Lancaster died peacefully on December 31, 2018, at St. Anne's Retirement Community in Columbia.  He was 90 years old and had been a resident in the Memory Unit for several years.  Richard was born October 3, 1928 to... View Obituary & Service Information

The family of Richard A. Lambert created this Life Tributes page to make it easy to share your memories.