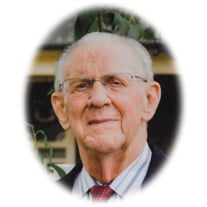 Ralph E. Ebersole, 94, formerly of Bainbridge, passed away on Friday, July 26, 2019 at Elmcroft Senior Living in Reading. Born in Bainbridge, he was the son of the late Reuben and Florence (Youtz) Ebersole. Ralph was the husband of the late Jean L. (Bishop) Ebersole who passed away on January 30, 2008.                 Ralph was a graduate of Bainbridge High School class of 1942. He proudly served in the United States Navy during WWII from 1942-1946 with the Naval Radio Station (RM3) in Butjo Lang Island, Papua New Guinea, part of the Admiral of the Islands. A Free and Accepted Mason, Ralph was a member of the Ashara-Casiphia Lodge, No. 551 of Mount Joy. He was President of Ebersole Brothers which specialized in rendering top white tallow and sold to Proctor and Gamble as a main client. A respected member of the National Rendering association he was chosen to represent the United States Agricultural Department to serve as an ambassador for China to assess the country's rendering process. He was then selected by Albrecht-Nell Rendering Equipment to assist Japan in upgrading to their equipment and work closely with Japan's main engineers. Later he sold his business to Moyer Packing Company and he continued to consult as an expert in his industry until recent years.                 During his retirement years he enjoyed traveling with his wife and grandchildren whom he loved dearly. In recent years he was fulfilled watching his great-grandchildren's sport and school activities. He participated yearly in the Veteran's Day tributes at schools and in the Bainbridge parade. He was a philanthropist to the American Legion instrumental in creating the monument at Bainbridge Cemetery in memory of all those who served from Conoy Township during WWII. He was a member of American Legion Posts Conewago and Elizabethtown in addition to the VFW in Elizabethtown, PA. He also greatly enjoyed clocks of all kinds.                 Ralph is survived by two children, Dr. Thomas Ebersole, husband of Jeanne of Reading and Barbara Klein, wife of William of Reading; six granddaughters, two step-granddaughters; thirteen great grandchildren; and a brother, James Ebersole, husband of Betty of Lancaster.                 He was preceded in death by four brothers, Richard, Glenn, Donald and John Ebersole; and two sisters, Geraldine Flowers and Hazel Byron.                 A funeral service honoring Ralph's life will be held at the Masonic Villages Sell Chapel, 200 Freemason Drive, Elizabethtown on Thursday, August 1, 2019 at 11AM. Family and friends will be received at the Sheetz Funeral Home, 16 East Main Street, Mount Joy on Wednesday, July 31, 2019 from 6 PM to 8 PM and again on Thursday at the Sell Chapel from 9:30 AM to 11 AM. Interment will follow the service at Bainbridge Cemetery. In lieu of flowers, memorial contributions may be made to the Animal Rescue League of Berks County, 58 Kennel Rd, Birdsboro, PA 19508.

Ralph E. Ebersole, 94, formerly of Bainbridge, passed away on Friday, July 26, 2019 at Elmcroft Senior Living in Reading. Born in Bainbridge, he was the son of the late Reuben and Florence (Youtz) Ebersole. Ralph was the husband of the late... View Obituary & Service Information

The family of Ralph E. Ebersole created this Life Tributes page to make it easy to share your memories.

Ralph E. Ebersole, 94, formerly of Bainbridge, passed away on...