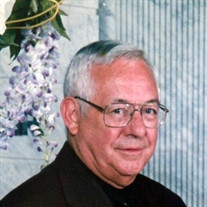 Paul E. Shearer, 86, of Mount Joy, passed away on Sunday, January 16, 2022 at his residence. Born in Manheim, he was the son of the late Samuel B. and Miriam (Fahnestock) Shearer. Paul was the husband of the late Winona (Markley) Shearer who passed away on June 9, 2021. Paul was a graduate of Manheim Central High School class of 1953. He won a sectional wrestling championship during the 1952-1953 season. Paul proudly served in the United States Army. He retired from Fulton Bank in 1998 after 40 years of service as a loan and operations manager. An avid fisherman and hunter, he enjoyed the outdoors. Paul was a member of St. Mark’s United Methodist Church in Mount Joy, Mount Joy Historical Society, Mount Joy Lions Club, Mount Joy Sportsmen’s Association, NRA, and was a life member of the Manheim Fire Company. He was a familiar face at Gus’s Keystone Restaurant where he was always well cared for by the staff. Paul is survived by three children, Joi (Jack) Garner, Brandi Shearer and Mark (Patti Graham) Shearer, all of Mount Joy. His five grandchildren; Jamie (Garner) married to Derek Boyer, Jenna (Garner) married to Ryan Ross and Joell (Garner) married to Henry Fooshee, Emily (Shearer) married to Conor Maghan and Colby Shearer as well as his five great-grandchildren; Colton and Easton Boyer and Regan, Rowen and Riley Ross will miss his daily presence. Also surviving is a brother, Kenneth Shearer of VA. He was preceded in death by a brother, J. Earl Shearer and a sister, Myrtle (Shearer) Harry. A funeral service honoring Paul’s life will be held at the Sheetz Funeral Home, Inc., 16 East Main Street, Mount Joy on Friday, January 21, 2022 at 11 AM. Family and friends will be received at the funeral home before the service from 10 AM to 11 AM. Interment will follow at light luncheon at the Wallick O’ Connor House (across the funeral home parking lot) at Chiques Church Cemetery. In lieu of flowers, memorial contributions may be made to St. Mark’s United Methodist Church, 37 East Main Street, Mount Joy, PA 17552.

Paul E. Shearer, 86, of Mount Joy, passed away on Sunday, January 16, 2022 at his residence. Born in Manheim, he was the son of the late Samuel B. and Miriam (Fahnestock) Shearer. Paul was the husband of the late Winona (Markley) Shearer who... View Obituary & Service Information

The family of Paul E. Shearer created this Life Tributes page to make it easy to share your memories.