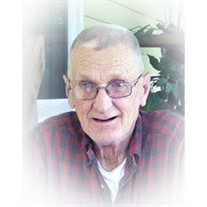 Paul E. Geiman, loving husband, father, grandfather, great grandfather, 73, of Elizabethtown, passed away on Tuesday, January 24, 2017 at Hospice and Community Care, Mount Joy. Born in Hershey, he was the son of Mary (Rohrer) and the late Paul H. Geiman. Paul was the husband of Maxine (Eater) Geiman with whom he celebrated 35 years of marriage this past October 9th. Paul was a graduate of Elizabethtown High School class of 1961. He proudly served his country in the United States Air Force during the Vietnam War. Paul drove truck for Wenger Feeds and Crowe Transportation. He was a member of Glossbrenner United Methodist Church, Mount Joy American Legion Post 185 and Elizabethtown VFW Post 5667. Paul enjoyed farming and spending time with his family and friends. Surviving in addition to his wife, Maxine, are six children, Kimberly Stone, fiancé of Michael Mason of Mount Joy, Timothy Leibfried, husband of Abby of Mount Joy, Kelly Flowers, wife of Ronald Jr. of Elizabethtown, Penny Geiman, companion of William Swisher of Elizabethtown, Jesse Geiman and Casey Geiman; eleven grandchildren; a great grandchild; and a sister, Sandra Galbreath, wife of Donnie of Marietta. He was preceded in death by a sister, Elizabeth Geiman. A funeral service honoring Paul's life will be held at Glossbrenner United Methodist Church, 713 Church Street, Monday, January 30, 2017 at 11 AM. Family and friends will be received at the church before the service from 10 AM to 11 AM. Interment will follow at Maytown Union Cemetery. In lieu of flowers, memorial contributions may be made to Glossbrenner United Methodist Church, 713 Church Street, Mount Joy, PA 17552.

The family of Paul E. Geiman created this Life Tributes page to make it easy to share your memories.