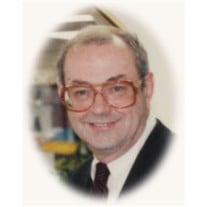 Patrick J. Boylan, 86, of Mount Joy, Pennsylvania passed away at home on Tuesday, October 10, 2020. He was born on April 15, 1934 in Saint Marys, Pennsylvania, son of the late Joseph and Laura (O'Hern) Boylan.  Pat grew up in a small town where everyone seemed to have a nickname and he was no exception. He was quite small at birth- as well as the youngest child - so his three older brothers and older sister called him "Itsy Bitsy." When he got older (and bigger) it was shortened to "Bits" and, for the rest of his life, to his Saint Marys friends and family he was Bits Boylan.  After graduating from Saint Marys Central Catholic High in 1952 he served overseas in the U.S. Army. He was proud of his Army service and greatly appreciated the care given to him by the physicians at the Veterans Affairs Hospital. Anyone who knew Pat knew that music was a big part of his life. He learned to play the guitar at an early age and earned his music union card while still in high school, playing guitar professionally until he departed for Army basic training. After completing his military service he attended and graduated from the Rockwell Piano School in 1958. On June 7, 1958, he married the former Sharon Lavonne Feldbauer in Kersey, Pennsylvania.  In addition to the guitar, Pat could play many musical instruments ranging from the piano to the harmonica to the ukulele. He spent the majority of his life in the music business, retiring from over two decades of employment with the Yamaha Piano Company in 1996, and he continued to consult for the company for many years thereafter. While at Yamaha he learned to speak Japanese and enjoyed surprising his Japanese colleagues with jokes in their native language.  Pat was also famous for his seemingly never-ending arsenal of funny stories and anecdotes. To the occasional embarrassment of his children and the constant delight of their friends, he could always be counted on for a wry observation or an outright laugh. His family often joked that having grandchildren was the greatest gift he ever received because it provided him with a whole new audience for his "material."  Pat is survived by his wife, his two children; Scott Boylan, husband of Kim Marie (Kozaczek) Boylan of Washington, DC, and Melanie ("Cricket") Boylan, wife of Edward Zobian of West Chester, Pennsylvania. He is also survived by his three above-average grandchildren: Catherine Boylan, daughter of Scott and Kim, and twins Teddy and Charlie Zobian, sons of Melanie and Ted. He was proceeded in death by his parents and three brothers: John, Richard and Charles, and a sister, Clair Marie.  A funeral will take place at Arlington National Cemetery at a later date.

Patrick J. Boylan, 86, of Mount Joy, Pennsylvania passed away at home on Tuesday, October 10, 2020. He was born on April 15, 1934 in Saint Marys, Pennsylvania, son of the late Joseph and Laura (O'Hern) Boylan.  Pat grew up in a small town where... View Obituary & Service Information

The family of Patrick J Boylan created this Life Tributes page to make it easy to share your memories.