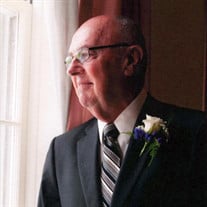 Nelson K. Ressler, 83, of Bainbridge, passed away at his home on Tuesday, July 20, 2021. Born in Conoy Township, he was the son of the late Clarence and Mary (Koser) Ressler. Nelson was married to the late Claudine G. Ressler until her death in 2008. In 2010 he married Hazel E. (Gish) Ressler. He will be missed by his son Dale E. Ressler husband of Bobbi L. of Bainbridge; his two grandchildren B. Nicholas Ressler husband of Carissa, of Elizabethtown and Samantha D. Tate, wife of Josh, of Hershey; 2 great-grandchildren Elias M. and Journei G. Ressler; and one brother Marlin Ressler husband of Anna Ruth, of Lebanon. Nelson was not afraid of hard work. During his career, he worked for the former John S. Buffenmyer Company of Mount Joy and the former Newcomer Oil Company, of Elizabethtown. Later he worked for the former J.H. Brubaker, Rohrestown, for 25 years until his retirement. After his retirement, Nelson worked part-time for Steve Strickland Farms in the chicken house. He loved to spend his time listening to Southern Gospel music and attended concerts whenever he could. In addition, he loved to travel to the Great Smokey Mountains and the Pennsylvania mountains for hunting trips. Nelson enjoyed working outside: his favorites were working in the garden and mowing the grass. During his life, Nelson was a devoted Christian and member of Conoy BIC Church, Grace Brethren Church, Mount Pleasant BIC, and most recently, at the Word of Life Chapel. He faithfully held positions as a member of the elder board, Sunday school superintendent, usher, and anywhere he was needed. Nelson was a great encouragement and support to the pastors of the churches he attended. In addition to his wife Claudine, Nelson was predeceased by two sisters and one brother. A service celebrating Nelson’s life will be held on Saturday, July 24 at 1:30 PM at Word of Life Chapel 139 Wickersham Road, Bainbridge, PA 17502. Family and Friends will be received from 12:00 PM until 1:30 PM. Interment will take place following the service at Mount Pleasant Cemetery, Mount Joy.

Nelson K. Ressler, 83, of Bainbridge, passed away at his home on Tuesday, July 20, 2021. Born in Conoy Township, he was the son of the late Clarence and Mary (Koser) Ressler. Nelson was married to the late Claudine G. Ressler until her death... View Obituary & Service Information

The family of Nelson K. Ressler created this Life Tributes page to make it easy to share your memories.

Nelson K. Ressler, 83, of Bainbridge, passed away at his home...