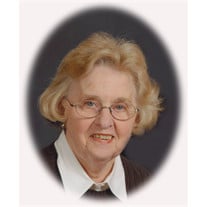 Nancy Groff Regensburger, 85 of Lancaster joined her Heavenly Father on Dec. 24, 2020. She was the loving wife of Richard Regensburger.They would have celebrated their 60th wedding anniversary in April 2021.   Also, surviving are her sons, Mark (Diane) of Fayetteville NC and David (Robin) of Lititz, grandchildren Jacob and Paul of Fayetteville and John, James and Emily of Lititz.   Born in Bareville, she was the daughter of the late John M. and Kathryn Zook Groff and was preceded in death by her sister Doris Garland.  Two foster sisters also survive, Genevieve Wimer (Ronald) of Lancaster and Robin McComsey (Eric) of East Petersburg.                  Nancy was a graduate of the former Marietta High School class of 1953.  She attended Elizabethtown College and later received her Bachelor of Biblical Studies at historic Lake Erie College in Painesville, OH.  Nancy went on to earn a Master of Theological Studies from St. John's Provincial Seminary, Plymouth, MI in 1985.  She and her husband Richard are members of Wayside Presbyterian Church, Landisville.                 A loving mother, homemaker and educator, Nancy raised her two sons and served as a Christian Educator in various churches in Ohio, Michigan, and Pennsylvania. During her career, she authored Bible study curriculum for Presbyterian, United Methodist and Roman Catholic publishers.  Her first publication includes a co-authored Bible study series, "Tell Me the Stories of Jesus," published by Educational Ministries, Inc. (1996). Following her experience with husband Dick's cancer in 1998, she wrote a caregiver's guide for cancer patients, "Walking Through Waters," published by the well-known Upper Room Books (2001). She co-authored a self-published study of Biblical women in the heritage of Jesus, "From Shame To Glory", through iUniverse Publishers (2014).              Due to the current Covid Restrictions, a Memorial Service will be announced at a later date.  Memorial contributions may be made to Wayside Presbyterian Church, 600 Stony Battery Rd, Landisville, PA 17538 or the Neurology Department at Penn State Hershey Medical Center, 500 University Drive, H037, Hershey, PA 17033.

Nancy Groff Regensburger, 85 of Lancaster joined her Heavenly Father on Dec. 24, 2020. She was the loving wife of Richard Regensburger.They would have celebrated their 60th wedding anniversary in April 2021.   Also, surviving are her sons, Mark... View Obituary & Service Information

The family of Nancy A. Regensburger created this Life Tributes page to make it easy to share your memories.