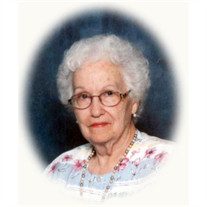 Mary Margaret Sager, 97, of Elizabethtown, went home to be with the Lord on Monday, June 11, 2018, at Penn State Hershey Medical Center. Born in Columbia, she was the daughter of the late Harold Goss and Mary Mae (Tome) Shireman. Mary Margaret was the loving wife of the late George Andrew Sager who died in August of 2002.             Earlier in her life, Mary operated a beauty salon in Columbia. Later she was a Cosmetology Teacher at Empire Beauty School and Supervisor and Teacher at the J.C. Penny in York. Upon retiring, Mary attended the PA School of Arts and Design. She enjoyed painting, wood carving, and quilting as a member of the Red Rose Quilters of Lancaster County. Mary researched genealogy for 35 years on the Shireman family. She discovered her grandfather was born on Three Mile Island, and Alexandra and Ulrich Shireman built the Lutheran Church in Maytown. She was a member of All Saints Lutheran Church in Hudson, Florida and Landisville Church of God. Mary graduated from Marietta High School class of 1937. She attended Hollywood Beauty School, Farrell Academy in Detroit, Schoeneman Inc. Advanced Cosemetology and L'Oreal School, Paris, France.             Mary is survived by six children, Donald, husband of Gina of Zellwood, FL, George, husband of Jennifer of Salunga, William, husband of Brenda of York, Michael of MT, James of Stevens and Ruthann of Duncanon; seventeen grandchildren; twenty three great-grandchildren; two brothers, Bill Shireman of TN and Charlie Shireman, husband of Joyce of Marietta; and a sister, Bertha Horst, wife of Jim of Manheim.             She was preceded in death by a son, Tom; and five brothers and sisters.             A funeral service honoring Mary's life will be held at the Sheetz Funeral Home, Inc. 16 East Main Street, Mount Joy on Monday, June 18, 2018, at 6 PM. Family and friends will be received at the funeral home before the service from 5 PM to 6 PM. Interment will be private in Greenwood Cemetery, Lancaster. In lieu of flowers, memorial contributions may be made to the Lancaster Library, 125 North Duke Street, Lancaster, PA 17602 or Masonic Villages Library, 1 Masonic Drive, Elizabethtown, PA 17022.

Mary Margaret Sager, 97, of Elizabethtown, went home to be with the Lord on Monday, June 11, 2018, at Penn State Hershey Medical Center. Born in Columbia, she was the daughter of the late Harold Goss and Mary Mae (Tome) Shireman. Mary Margaret... View Obituary & Service Information

The family of Mary Margaret Sager created this Life Tributes page to make it easy to share your memories.

Mary Margaret Sager, 97, of Elizabethtown, went home to be with...