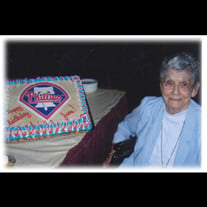 M. June Smith, 100 years of age, passed peacefully with her family by her side on Friday, October 7, 2016. She was the loving wife of the late Irvin H. Smith Jr., with whom she shared 71 years of marriage. June will be missed by her children, Carol (Donald) Miller of Columbia, Harold (Donna Flick) Smith of Athens, and Keith D. (Deborah K. Hollenbaugh) Smith of Marietta. She is also survived by her 8 grandchildren, 13 great grandchildren and 2 great-great grandchildren. June was a graduate of the Elizabethtown High School, class of 1934. She married Irvin the following year and began to raise a family. Later, she worked at the former Grandview Elementary School in Mount Joy. June was an 80 year member of Trinity Lutheran Church, where she was an active volunteer during her life. She was also a life member of the American Legion, Post 185 of Mount Joy. June enjoyed making ceramics, bird watching, bowling and had special place in her heart for every baby she ever held. An avid Phillies fan, she would proudly wear her cap on the day following a win for the team. For her 100th birthday, the Phillies Organization presented her with a large box, full of Phillies fan wear and gear which she proudly adorned in her home. June will be fondly remembered for her love and devotion to her family and the special memories they shared. A life well lived, June had a smile for everyone she met. Born in Elizabethtown, she was the daughter of the late David W. and Elva Hainley Halk. She was preceded in death by her parents, a brother, Bruce Halk and a sister Ruth Weidman. A Funeral Service honoring June's life will be held at Trinity Lutheran Church, 47 West Main Street, Mount Joy, on Friday, October 14, 2016. Her family will receive friends at the church from 10 to 11 am. Interment will be private in Indiantown Gap National Cemetery. In lieu of flowers, memorial contributions may be made to Hospice and Community Care, P.O. Box 4125, Lancaster PA 17604-4125, or to Masonic Village at Elizabethtown Hospice, One Masonic Drive, Elizabethtown, PA 17022. On line condolences to www.sheetzfuneralhome.com

M. June Smith, 100 years of age, passed peacefully with her family by her side on Friday, October 7, 2016. She was the loving wife of the late Irvin H. Smith Jr., with whom she shared 71 years of marriage. June will be missed by her children,... View Obituary & Service Information

The family of M. JUNE SMITH created this Life Tributes page to make it easy to share your memories.