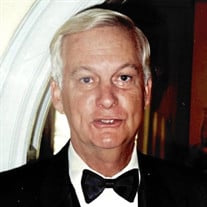 On July 19, 2021, Lance Hunter Butler, Sr., loving husband, father and grandfather, passed away at the age of 83 at the Masonic Village in Elizabethtown, PA. Lance was born on November 10, 1938 to Frank and Beatrice Butler. He grew up on their farm in Swedesboro, NJ. Lance graduated from Gettysburg College in 1962. On June 16, 1962, he married Eleanor Schoeller, to whom he had dated since high school. They raised three children Kristen, Heather and Lance, Jr. Lance was a high school science teacher and football coach before he began his twenty-nine year career as a Human Resources Manager with the DuPont Company. He later worked for International Paper as a Senior Employee Productivity Consultant. With the DuPont company, the Butler family lived in Seaford, Delaware and Easton, Connecticut but it was Kennett Square, Pennsylvania that they called home for over 40 years. Lance loved football and baseball. He played football at Swedesboro High School and Gettysburg College. He was an avid Eagles, Phillies and Green Bay Packers fan. Come Fall, Lance could be seen wearing his iconic Green Bay Packers jacket. Having been raised on a farm, he enjoyed gardening and yard work. Lance was preceded in death by his parents Frank and Beatrice and sister Lura. He is survived by his wife Eleanor, his three children Kristen Butler Kaminski, Heather Butler Tessier and Lance Butler, Jr., their spouses and partners and his beloved grandchildren Nathaniel Butler, Samantha Tessier, and Chase Butler. In lieu of gifts and flowers, please consider a donation to the Compassionate Care Fund at Masonic Village Elizabethtown, One Masonic Drive, Elizabethtown, PA 17022 . Per his wishes, there will be no funeral. There will be a celebration of life held at a later date. The family wishes to thank the caring doctors and staff at the Masonic Village in Elizabethtown for the excellent care both Lance and Eleanor have received.

On July 19, 2021, Lance Hunter Butler, Sr., loving husband, father and grandfather, passed away at the age of 83 at the Masonic Village in Elizabethtown, PA. Lance was born on November 10, 1938 to Frank and Beatrice Butler. He grew up on their... View Obituary & Service Information

The family of Lance Hunter Butler Sr. created this Life Tributes page to make it easy to share your memories.