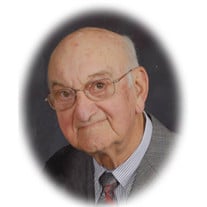 Kenneth A. Gainer, 92, of Mount Joy, passed away on Wednesday, October17, 2018 at Juniper Village, Mount Joy. He was the son of the late Cyrus and Martha (Hetrich) Gainer. Ken was the husband of the late Evelyn (Getz) Gainer, who passed away on May 24, 2010.They celebrated 62 years of married life. He was a member of St. Mark's United Methodist Church for 75 years, serving in various capacities, most recently on the finance committee. Ken was a graduate of the former Mount Joy High School, class of 1944. He proudly served in the United States Army Air Corps during WWII. Ken later graduated from F&M College in 1949 with a B.S. in Chemistry. He spent his entire professional career working at Raymark Industries (formerly Raybestos-Manhattan), at both the division level at Manheim, PA and the corporate level at Trumbull, CT. His professional responsibilities ranged from entrance level bench chemist to management positions in manufacturing, Quality Control, sales and marketing, materials research, and as Division General Manager. He achieved the designation as a Certified Engineer. He later served as the Chief Quality Assurance Engineer at the corporate level. These responsibilities required extensive traveling, both domestically and internationally, including trips to Japan, Australia, and Brazil. During his career with Raymark Industries he worked closely with the Department of Defense in developing high temperature products for military purposes. He was actively involved in the development of the radar absorbing resins for the SR71 and B1 bombers. He thoroughly enjoyed working with the aerospace industry and was present for a number of space shuttle liftoffs at Cape Kennedy. His professional affiliations included the American Chemical Society, the Society of Automotive Engineers, Society of Plastics Engineers, and the American Society for Quality Control, serving as the president of the Harrisburg Section. He served as Vice President and was a Board member of the Lancaster Manufacturers Association. In the local community, he served on the Boards of Directors for the Mount Joy Library and the Donegal School District, and as a Republican Party Committeeman for the East Ward of Mount Joy. He was a member of the Casiphia Lodge No. 551, and the American Legion Post No. 185, having served as the Adjutant. He took great pride in serving on the Board of the Mount Joy Borough Authority, especially his role as Chairman for 23 years. He received the PMAA Extended Service Award in honor of his 33 years of service. He enjoyed fishing in Canada, golfing at Tree Top Golf Course, and attending NASCAR races, especially the Daytona 500. He and Evelyn spent many Februarys in Daytona Beach, Florida. Ken is survived by two sons, Craig Gainer, husband of Susan, of Ellicott City, MD and Mark Gainer, husband of Michele, of Lancaster; a granddaughter, Lindsay Attaway, wife of Matthew, of Issaquah, WA; a great grandson, Seth Guodong Attaway; along with three nieces and a nephew. He was preceded in death by a son, Keith, and a sister, Ernestine Zurin. The family would like to acknowledge the loving care that Dad received from the staffs at Juniper Village and Hospice & Community Care. A funeral service honoring Ken's life will be held at St. Mark's United Methodist Church, 37 East Main Street, Mount Joy on Wednesday, October 24, 2018 at 11 AM. Family and friends will be received at the Sheetz Funeral Home, 16 East Main Street, Mount Joy on Tuesday, October 23, 2018 from 6 PM to 8 PM and again on Wednesday at the church before the service from 10 AM to 11 AM. Interment will follow the service at West Green Tree Cemetery. In lieu of flowers, contributions may be made in his memory to St. Mark's United Methodist Church Building Fund, 37 East Main Street, Mount Joy, PA 17552 or the Cystic Fibrosis Foundation-Delaware Valley Chapter, 1601 Market Street, Philadelphia, PA 19103.

Kenneth A. Gainer, 92, of Mount Joy, passed away on Wednesday, October17, 2018 at Juniper Village, Mount Joy. He was the son of the late Cyrus and Martha (Hetrich) Gainer. Ken was the husband of the late Evelyn (Getz) Gainer, who passed away... View Obituary & Service Information

The family of Kenneth A. Gainer created this Life Tributes page to make it easy to share your memories.