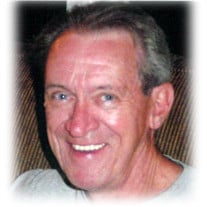 John "Ed" Snyder, 74, of Mount Joy, passed away on Tuesday, April 4, 2017 at the Magnolias of Lancaster after a long battle with Alzheimer's Disease.  He was the beloved husband of Linda (Culpepper) Snyder, with whom he celebrated 48 years of marriage. Born in Pottsville, he was the son of the late Dorothy and Russell Snyder. Ed was a 1960 graduate of Schuylkill Haven High School and a proud member of the varsity basketball, baseball and football teams. He also participated in the high school band and orchestra. He attended the Pennsylvania State University for four years and graduated in 1964 with a Bachelor of Science degree in Business Management. While at State College, he had fond memories of working as a waiter at the historic Tavern restaurant. Upon graduation at Penn State, Ed began his management career in the apparel industry working for Imperial Reading in Dothan, Alabama as a plant manager. His career progressed into several leadership positions throughout Tennessee, Virginia and North Carolina working for Healthtex and VF Corporation, that produced many of the nation's most popular clothing and apparel lines including Lee Jeans, Wrangler Jeans and Jansport. After a successful career, he retired in 2005. He was an avid follower of all sports, and particularly a faithful Penn State football and Philadelphia Phillies fan. Ed enjoyed reading, golfing, vacationing and visiting with family and friends. In addition to his wife Linda, Ed is survived by his children Amanda Blake of Leesburg Virginia, Lisa Keane and husband, Tim, of Vernon, Connecticut; Mike Snyder and wife, Brooke of Ridley, Pennsylvania; Jeff Snyder and wife, Michelle, of Bangor, Pennsylvania; 9 grandchildren and 1 great grandchild. A private memorial service will be held at the convenience of the family. In lieu of flowers, memorial contributions may be made to the Alzheimer's Association Greater Pennsylvania Chapter, 2595 Interstate Drive, Suite 100, Harrisburg, PA 17110.

John "Ed" Snyder, 74, of Mount Joy, passed away on Tuesday, April 4, 2017 at the Magnolias of Lancaster after a long battle with Alzheimer's Disease.  He was the beloved husband of Linda (Culpepper) Snyder, with whom he celebrated 48 years of... View Obituary & Service Information

The family of John "Ed" Snyder created this Life Tributes page to make it easy to share your memories.