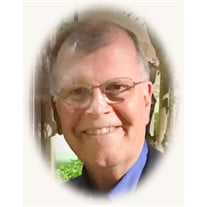 John Paul Hydinger, 74, died peacefully on 7 /12 / 2020, after a long battle with cancer. Born on September 23, 1945, he was the son of the late Marlin and Helen Hydinger.  As a Navy Junior, John attended high schools in both England and France, after which he was appointed to the United States Naval Academy, graduating with a Bachelor of Science in 1968. After one tour of duty on a destroyer, John attended the Naval Postgraduate School in Monterey, California, graduating in 1972 with a Master's in Computer Science. While at Postgraduate School, John met and married his wife, Tullia. John's Naval career took them to the East Coast and duty stations in RI,PA, and VA, from where, in 1978, John resigned his Naval Commission as a LCDR. and returned to civilian life and the world of computers, with positions as VP at USA Direct in York, PA, and continuing as CEO of both Quantum Radiology (York), and Lancaster Orthopedic Group, retiring from the latter in August 2016. Over the years, John and Tullia enjoyed traveling whenever the opportunity presented itself, often seeing family and friends along the way.  Their "special" place was Sint Maarten, which they visited at least 19 times from 2006-2019. When not traveling, John enjoyed perfecting his landscaping skills of many years, reading and playing bridge. Preceding John in death were his parents Capt. Marlin C. Hydinger, USN, (ret)., and Helen Scott Hydinger; his brother, Capt. Robert M. Hydinger, USN, (ret); sister, Nancy Thompson; brother-in-law LTC. William R. Thompson, (ret). He is survived by his wife, Tullia, and sons Michael and Christopher; sister Karen Dale Dyer; brother-in-law, Everett Dyer; sister-in-law, Dolores Hydinger and several nephews and nieces. Due to COVID19, there will be a private service for the immediate family. A public Memorial Service will be announced at a later date. In lieu of flowers, contributions in John's name may be made to: The Wounded Warrior Project, PO Box 75816 Topeka, Kansas 66675-8516.

John Paul Hydinger, 74, died peacefully on 7 /12 / 2020, after a long battle with cancer. Born on September 23, 1945, he was the son of the late Marlin and Helen Hydinger.  As a Navy Junior, John attended high schools in both England and France,... View Obituary & Service Information

The family of John Paul Hydinger created this Life Tributes page to make it easy to share your memories.