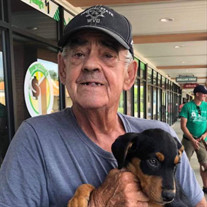 John Lee Houser of Marietta passed away on October 20, 2021, at his residence. Born on February 11, 1941, he was the son of the late John A. and Kathryn Houser. Lee married his high school sweetheart, the late Antoinette “Toni” (Wufsus) Houser. Together Lee and Toni raised and educated three children: daughter Lisa Phelan, wife of Peter, of Mechanicsburg, son John Lee Houser, husband of Jaqueline, of Lancaster, and son Dave Houser, husband of Lisa, of Marietta. Pap the Great was adored by his seven grandchildren and three great-grandchildren. He is also survived by his sister June Guy, wife of Darryl of Grier City, and his sister-in-law Joan Houser of Levittown, and his dog Coley. Lee was a resident of Grier City for most of his life. He graduated from Mahanoy Township High School in 1959. Lee was a successful high school athlete. He earned All-America honors as a high school quarterback. He was awarded a full scholarship to play baseball at Florida State University. He received offers to play professional baseball. Lee was a truck driver and heavy equipment operator; most of his working life was with Sun Chemical Inc. and M.F. Ronca and Sons. He never retired, working until he was 79 years old. He was a member of St. Richards Church, Park Crest, PA. Lee and Toni provided a home for their children filled with love, honor, and respect. There was never a dull moment as “Big Dad” enjoyed playing various forms of baseball, football, basketball, and golf games around the house. His simple outlook and sense of humor will be missed. Any day with Pop was sure to be entertaining. Lee enjoyed playing golf. He hunted and fished his whole life. In his later years, Lee spent as much time as he could with his friends at the cabin. He loved watching all his grandchildren play sports. His favorite sports teams were any team his grandchildren were playing on at the time. In addition to his wife and parents, Lee was preceded in death by his brother Charles. There will be a private ceremony with family honoring Lee’s life at a later date. In lieu of flowers, please make contributions to the Mahanoy City Public Library 17 W Mahanoy St, Mahanoy City, PA 17948.

John Lee Houser of Marietta passed away on October 20, 2021, at his residence. Born on February 11, 1941, he was the son of the late John A. and Kathryn Houser. Lee married his high school sweetheart, the late Antoinette &#8220;Toni&#8221; (Wufsus)... View Obituary & Service Information

The family of John Lee Houser created this Life Tributes page to make it easy to share your memories.