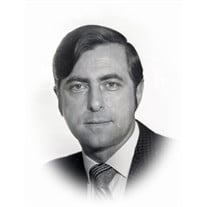 Jay R. Houseal, 89, of Maytown passed away on February 7, 2017.  He was the husband of the late Fay A. Gainer Houseal who died in 1989.  Born in Maytown on August 30, 1927, he was the son of the late Robert M., and Viola M. Arnold Houseal.  He is survived by a son Tony J., (Alicia) Houseal, his grandchildren, Jessica M. and Nicholas J. Houseal both of Elizbethtown, and his two sisters; Patricia A. (Harold) Derr of Maytown and Peggy L. (James) Drohan of Mount Joy, and countless nieces and nephews. He was preceded in death by two sons, Michael in 1960 and Stephan J. in 2015. Jay was a graduate of the former East Donegal Township High School, class of 1945.  A proud veteran, he served in the US Navy during WWII.  He was a member of the Maytown Church of God, and the Maytown American Legion, Post #809.  Jay was employed as tax collector for East Donegal Township from 1974 until 2002 and was a past member of the PA State Tax Collectors Association and served as past president of the Lancaster County Tax Collectors Association.  Jay greeted many customers in the former Houseal Store in Maytown which he managed and operated from 1965 until his retirement in January 2009. Jay enjoyed going to the beach, hunting with his friends and watching football and NASCAR. A funeral service honoring Jay's life will be held at the Sheetz Funeral Home, Inc., 16 East Main Street, Mount Joy on Friday, February 10, 2017 at 11 am.  A viewing will be held on Thursday evening from 6 to 8 pm and again on Friday from 10 AM to 11 AM both at the Sheetz Funeral Home.  Interment to follow in Maytown Union Cemetery, Maytown PA.  In lieu of flowers, memorial contributions to the American Cancer Society, 314 Good Drive, Lancaster, PA 17603 would be deeply appreciated.

The family of Jay R. Houseal created this Life Tributes page to make it easy to share your memories.