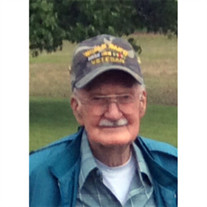 James F. Young, 97, of Mount Joy passed away on Thursday, April 18, 2019.  He was the husband of A. Yvonne Schneider Young with whom he shared 60 years of marriage.  He is survived by his children, Jeanette Dexter of OH, James A. Young of New Holland, Timothy L. (Barbara) Young of Enola, and Mark E. (Marion) Young of Mount Joy and stepson P. Steven (Karin) Roland of Pittsburgh.  Also, surviving are his 11 grandchildren and 11 great-grandchildren.  Jim was preceded in death by a brother Philip and a stepson John Roland.  Born in Toledo, Ohio, he was the son of the late Philip Young and Irene Brown Wynne. Jim proudly served in the United States Marine Corps, First Marine Division, participating in the invasions of Guadalcanal, Peleliu and Cape Gloucester. The Marine Corps has always had a special spot in Jim's heart.  He was a founding member of the Marine Corps League, Wellsboro, and a Life Member of the USMC First Marine Div. Assoc. attended National Conventions and events.  Jim's personal war memoirs were highlighted in the book titled "Voices of The Pacific" written by Adam Makos, in addition to being selected as a consultant for the HBO Miniseries  "The Pacific."  Jim was also a Life Member VFW Post 5752, Mount Joy, the American Legion Post 329 Elizabethtown and a 32nd Degree Free and Accepted Mason he was a member of Valley Of Coudersport and a social member of the Elks, Columbia/Middletown. He was also a graduate of the former Mount Joy High School, class of 1941. Later in his life, he and Yvonne operated the former Young's Brookside Inn in Coudersport.  Jim's service to his country and lifelong patriotism will be remembered through his many friends and family.   A Funeral Service will be held at the Sheetz Funeral Home, Inc., 16 East Main Street, Mount Joy, on Wednesday, April 24th, 2019 at 11 AM.  Interment with honors provided by the USMC Honor Guard will follow in Indiantown Gap National Cemetery, Annville.  Jim's family will receive friends at the Sheetz Funeral Home, Mount Joy on Tuesday evening, April 23, 2019, from 6 to 8 PM and again on Wednesday morning from 10 to 11 AM.  In lieu of flowers, memorial contributions to Lebanon VA Hospice Unit, 1700 S. Lincoln Ave. Lebanon PA 17042 would be deeply appreciated.

James F. Young, 97, of Mount Joy passed away on Thursday, April 18, 2019.  He was the husband of A. Yvonne Schneider Young with whom he shared 60 years of marriage.  He is survived by his children, Jeanette Dexter of OH, James A. Young of New... View Obituary & Service Information

The family of James F. Young created this Life Tributes page to make it easy to share your memories.