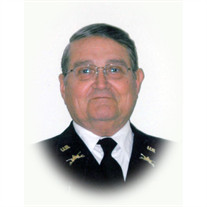 James Carroll Shepard, Lieutenant Colonel, U. S. Army Retired, died June 12, 2019.  He was born in Georgia and spent most of his youth and early adulthood in Florida.  Jim was a Distinguished Military Graduate of Stetson University's ROTC program in 1957.  He later earned a Master's Degree in American History, specializing in U.S. Military History, at Louisiana State University.  His post graduate studies were at Kansas State University.  In addition to civilian schooling, he graduated from the U.S. Army Armor Officer's Basic and Advanced Courses, Company Officer's Administration Course, Intelligence Officer's Course, Special Warfare School, and the Army Command and General Staff College. Lt. Colonel Shepard commanded Army Tank Units and held Staff positions in the 2nd Armored, 3rd Armored, and 2nd Infantry Divisions.  In addition to troop and staff duty, he taught at Louisiana State University (ROTC) and the Army Command and General Staff College at Fort Leavenworth, Kansas.  He was assigned to the Military History Institute, Carlisle Barracks, Pennsylvania and the Army Training Board, Fort Eustis, Virginia.  He was a published military historian on the American Military History.  In that regard he served the Department of Transportation Center, Fort Eustis, until his final retirement in 1992.  One of his final assignments was as creator and director of "The U.S. Army School of the Air", an experiment to evaluate the efficiency of updating soldier skills at remote sites via two-way television in the 1980's. He served two tours of duty in the Republic of Vietnam.  First, serving as an Advisor to Vietnamese Regional Forces in the Delta of South Vietnam; returning as the Chief of the Intelligence Collection Division, Nha Trang.  Shepard was twice awarded the Bronze Star Medal, twice awarded the Vietnamese Cross of Gallantry, twice the Army Meritorious Service Medal, the Air Medal, the Army Commendation Medal, the Vietnam Campaign Medal with six Campaign Stars, and the Combat Infantry Badge, in addition to what he called "the just being there medals." After retirement he continued to use his skills as an educator. He accepted a position with The Center for Excellence (Center) in Williamsburg, Virginia.  The Center provided lessons for re-certification requirements to public school teachers via television.  In addition, he brought his knowledge of the Bible and his historical knowledge of the Middle East to his well-attended Sunday School lessons at Walnut Hills Baptist Church in Williamsburg, where he also served as Deacon.  He served on the advisory board of Grove Christian Outreach Center.  In his leisure time, he enjoyed golfing with neighbors and friends.  His purple and gold golf bag and tiger head covers reflected his love of LSU football. He was preceded in death by his parents, Mr. and Mrs. J. C. Shepard of Valdosta, Georgia, and his sister, Marjorie (Shepard)) Adams, of Las Vegas, Nevada.  He is survived by his loving wife, Ruth (Dell) Shepard, brother, Kenneth Shepard, son, Brian (Jennifer) Shepard, daughter Sondra Smith, stepsons, Richard (Sharron) Watson and Roger (Brenda) Watson, and many wonderful grandchildren and great grandchildren.   Interment will be held at Indiantown Gap National Cemetery, Annville PA.  Memorial contributions to Grove Christian Outreach Center would be deeply appreciated by his family. (Grove Christian Outreach Center 8910-E Pocahontas Trail, Williamsburg, VA 23185). Funeral arrangements are entrusted to The Sheetz Funeral Home, Inc., Mount Joy.

James Carroll Shepard, Lieutenant Colonel, U. S. Army Retired, died June 12, 2019.  He was born in Georgia and spent most of his youth and early adulthood in Florida.  Jim was a Distinguished Military Graduate of Stetson University's ROTC program... View Obituary & Service Information

The family of James C. Shepard created this Life Tributes page to make it easy to share your memories.