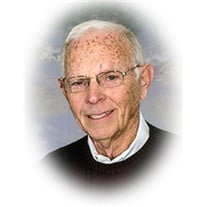 Joseph Douglas McNaughton, 84, of Elizabethtown, died on Tuesday, November 29, 2016, at Masonic Villages Elizabethtown. He was the beloved husband of Betty Gutshall McNaughton with whom he recently celebrated 66 years of marriage. He was born in Lancaster County, the son of the late C. Fred McNaughton and Mary Hunniger McNaughton. As a young man he worked for his father in law at Gutshall's Fruit Stand in Marietta. For 35 years he worked as a computer specialist for the Federal Government at Olmstead Air Force Base, New Cumberland Army Depot, and Mechanicsburg Naval Base. After retiring from the government, he was a realtor for a local real estate agency. Doug, as he was kindly known by his friends, shared his love of the outdoors with his family. He enjoyed hunting, fishing and boating on the Susquehanna River. He was an avid golfer and enjoyed playing golf with his dad, daughters and his buddies from the military bases. He and his wife loved to travel throughout the US and especially enjoyed their cruise trips. Family was his greatest pride and joy. In addition to his wife, Betty, he will be lovingly missed by his two daughters, Donna McNaughton of Elizabethtown and Connie McNaughton Koser, wife of Fred of Eloy, AZ; One granddaughter, Marci Koser of KY; and two great grandchildren. He was preceded in death by two brothers, Richard (Dick) McNaughton and C. Fred McNaughton both from Bainbridge. Doug was a member of Milton Grove Sportsman Club and Christ Evangelical Lutheran Church, Elizabethtown. The family wishes to thank the nurses and staff of Masonic Villages-Lafayette West and Hospice and Community Care for their kindness and personal care. In keeping with Doug's wishes there will be no public service. In lieu of flowers, memorial contributions may be made to Hospice and Community Care, 685 Good Drive, PO Box 4125, Lancaster, PA 17604. To send an online condolence, please visit www.sheetzfuneralhome.com

Joseph Douglas McNaughton, 84, of Elizabethtown, died on Tuesday, November 29, 2016, at Masonic Villages Elizabethtown. He was the beloved husband of Betty Gutshall McNaughton with whom he recently celebrated 66 years of marriage. He was born... View Obituary & Service Information

The family of JOSEPH D. MCNAUGHTON created this Life Tributes page to make it easy to share your memories.