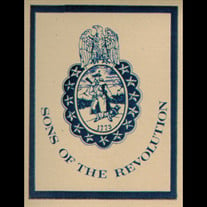 John Edward Haines, 90, of Newtown Square, PA, passed away on Sunday, September 11, 2016. He was the husband of the late Mary E. Clapper Haines, who died in 1994. He will be remembered by his three sons, Jeffrey, married to Karen Cook Haines of Collegeville, Scott, married to Denise Dinan Haines of Wilmington Del., and Brian Haines of Newtown Square. His grandchildren, Shannon, Kelly, Brian, Daniel, Rachael, and Steven Haines will miss his daily presence. He was preceded in death by his brother, Henry Haines and sister, Miriam Baum. John was born in Columbia, PA, and was raised in Historic Maytown, where he later graduated from the former East Donegal High School, a member of the class of 1943. Shortly after graduation, he entered the Navy and proudly served his country during WWII; yet humbly declined being a member of the Greatest Generation, as he "only did what he was told to do." He later earned his Bachelor of Business Administration from the Wharton School of The University of Pennsylvania, and had a long career as a real estate appraiser (Member of the Appraisal Institute) serving Southeast Pennsylvania. A spiritual person, he was a longtime member of the Marple Presbyterian Church, Broomall, where he had served on the board of trustees. He proudly owned and maintained the Historic Haines House on the Maytown Square; was a member of The Sons of the American Revolution, The Descendants of Valley Forge, and a member of The American Legion, Post 0809, Maytown PA, and served as a committeeman for Newtown Township. A Free and Accepted 32nd Degree Mason, he was a member of the Abraham C. Treichler Lodge 0682, Elizabethtown, The Consistory in the Valley of Harrisburg and the Ancient and Accepted Scottish Rite. John was a daily and active jogger and was quoted that "he must have circled the globe more than once in running shoes." He enjoyed gardening, traveling and will be fondly remembered by his family for the wonderful vacations they shared. Funeral services will be private and at the convenience of the family. Interment in the Maytown Reformed UCC Cemetery, Maytown. In lieu of flowers, memorial contributions may be made to Presby's Inspired Life, Department of Mission Support, 2000 Joshua Road, Lafayette Hill, PA 19444. To send an online condolence, please visit www.sheetzfuneralhome.com

John Edward Haines, 90, of Newtown Square, PA, passed away on Sunday, September 11, 2016. He was the husband of the late Mary E. Clapper Haines, who died in 1994. He will be remembered by his three sons, Jeffrey, married to Karen Cook Haines... View Obituary & Service Information

The family of JOHN EDWARD HAINES created this Life Tributes page to make it easy to share your memories.

John Edward Haines, 90, of Newtown Square, PA, passed away on...