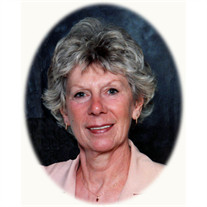 Holly T. Oatman, 75, of Lancaster, passed away peacefully on Saturday October 28, 2017 with her family by her side. Her late husband, Kenneth R. Oatman Sr. died in 2015.  Holly is survived by her two children; Eileen married to Donald Schoelkopf and Todd Murr, both of Lancaster. Also surviving are  Ken's children, Kenneth R. Oatman Jr., of Lancaster and Tracey L. Oktela wife of Joe Oktela, of Willow Street.  Her 10 grandchildren and 3 great-grandchildren will miss her tender smile and loving guidance. Holly was a graduate of the Columbia High School, class of 1960.  She was later employed by the  former AMP Inc., of Mount Joy and retired from Kellogg  Co. Lancaster.  She attended Holy Trinity Catholic in Columbia and enjoyed traveling, gardening, and spending time with her children and grandchildren.  Holly had a special gift of caring for others in their time of need.  Throughout her life she became a caretaker for many friends and family for which she will be lovingly remembered. Born in Columbia, she was the daughter of the late Amos and Helen Hartman Murry.  Holly is survived by two sisters:  Mary Lou wife of Thomas Lawson, of Columbia and Anne wife of Richard Gerz, of Willow Street.  She was preceded in death by her brother Harold Murry. A Mass of Christian Burial will be held on Friday, November 3, 2017, at 11 AM at Holy Trinity Catholic Church, 409 Cherry St. Columbia, PA with the Reverend Stephen P. Kelley as Celebrant.  Holly's family will receive friends at the church from 10 to 11 AM.  Interment will follow in Silver Spring Cemetery, West Hempfield Twp.  In Lieu of flowers, memorial contributions to the Alzheimer's Association: Greater Pennsylvania Chapter:  2595 Interstate Dr. Suite 100, Harrisburg, PA 17110 would be deeply appreciated. Online condolences to www.sheetzfuneralhome.com Sheetz Funeral Home, Mount Joy

Holly T. Oatman, 75, of Lancaster, passed away peacefully on Saturday October 28, 2017 with her family by her side. Her late husband, Kenneth R. Oatman Sr. died in 2015.  Holly is survived by her two children; Eileen married to Donald Schoelkopf... View Obituary & Service Information

The family of Holly T. Oatman created this Life Tributes page to make it easy to share your memories.

Holly T. Oatman, 75, of Lancaster, passed away peacefully on...