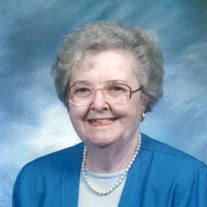 Helen B. Hamilton, 92, of Lancaster passed away on January 13, 2022. She was the wife of the late Gilbert A. Hamilton who passed away in April 2020 and together, they shared 70 years of marriage. Born on December 8, 1929 in Wilmington, Delaware, she was the daughter of John R. Brown and Mary Edna Webb. Helen was a graduate of P.S. duPont High School , Wilmington, class of 1946. Following high school, she worked as an office worker in Wilmington, Delaware. Helen and Gilbert moved to Lancaster Count in the early 1950s and during the 1960s, Helen worked as the secretary for the Elizabeth Martin Elementary School, Lancaster. In the 1970’s and 1980’s, while living in Mount Joy, she owned an antique shop and enjoyed collecting unique antiques. In 1973, Helen helped organized and implemented the “ Meals on Wheels” program for Mount Joy, Elizabethtown, Marietta, Bainbridge, and Mastersonville areas. During her 15 years of service with Meals on Wheels, Helen oversaw the volunteer group growth to 30 people who prepared, served, and delivered food to those who depended on their daily dedication. For her commitment, she was recognized as “Mount Joy Woman of the Year” and received a pewter plate for her service as well as being honored in the Mount Joy Memorial Day parade. Helen was a member of Glossbrenner U.M. Church of Mount Joy and especially enjoyed spending time with her grandchildren at her home in Landisville, PA. During her retirement, Helen and her husband enjoyed traveling in their RV over an 11-year period to every state except Alaska and Hawaii. In 2002, she and Gilbert moved to Woodcrest Villa. While living at Woodcrest Villa, Helen helped the community in various capacities. She volunteered her time at the “Country Store” as well as the thrift shop. She also provided her time serving as a fill-in receptionist, delivering newspapers in the building and selling greeting cards to residents and was an active participant in the “Red Hat Society She is survived by two sons, John S. Hamilton, husband of Jean of Lancaster; and James J. Hamilton, husband of Jana of Mount Joy. Also surviving are four grandchildren, Matthew, husband of Christina Botros Hamilton, Anaheim, CA; Emily, wife of Michael Harnish, Landisville, PA; Ryan, fiancée of Sara, Maytown, PA; and Sarah, wife of Katherine Purcell, Harleysville, PA. She is also survived by six great-grandchildren. She was preceded in death by a brother George A. Brown and a sister, Frances B. Ripley. A memorial service honoring Helen's life will be held at Sheetz Funeral Home, Inc, 16 East Main Street, Mount Joy on Saturday, January 22, 2022, at 11 AM. Family and friends will be received at the funeral home before the service from 10 AM to 11 AM. Burial will be private at Gracelawn Memorial Park, New Castle, DE. In lieu of flowers, donations in her memory can be made to the Mennonite Home Benevolent Care Fund, 1520 Harrisburg Pike, Lancaster, PA 17601. Arrangements by the Sheetz Funeral Home, Inc, Mount Joy, PA

Helen B. Hamilton, 92, of Lancaster passed away on January 13, 2022. She was the wife of the late Gilbert A. Hamilton who passed away in April 2020 and together, they shared 70 years of marriage. Born on December 8, 1929 in Wilmington, Delaware,... View Obituary & Service Information

The family of Helen B. Hamilton created this Life Tributes page to make it easy to share your memories.