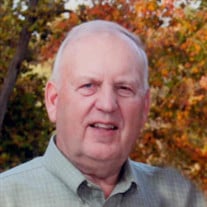 HARRY E. HERSHEY, JR. 1933-2021 “For to me, to live is Christ and to die is gain” Philippians 1:21. On January 16, 1933, Harry entered this world as a gift to his parents, the late Harry & Ada Fridy Hershey. He departed this world at The Courtyards, Brethren Village, early Thursday morning, September 16, 2021. Three values were of great importance to him: his faith, family, and farming. During his years at home, his education began and ended in Maytown at his graduation from East Donegal High School, class of 1950. He sang in the chorus, played basketball, and participated in Ag courses. Harry played softball for many years, even including the 60+ league. He is survived by his wife of 62 years, S. Joan (Wenger). They were blessed with two children, Steve ( Patty J. Shenk) and Sharon R., ( Barry K. Kreider); 5 grandchildren: Jill (Mitch Meador), Ryan Hershey, ( Lindsay ), Seth Hershey, (Kelsey), Mitch Kreider, ( Ashley) and Marc Kreider, ( Natalie). Eleven great-grandchildren that gave him much joy are: Harrison, Bennett, and Theodore Meador; Ruby and Warren Hershey; Hadlee, Charlotte, and Molly Hershey; Luke and Carson Kreider and Addison Kreider. Also, surviving are his brother John Hershey (Mable), sister-in-law Pat Hershey, Dr. J. Calvin and Shirley Wenger, brother-in-law & sister-in-law, and numerous nieces and nephews. Preceding him in death are brothers Robert and Charles Hershey and sister Pauline Engle. Harry was a dedicated member of the Florin Church of the Brethren, where he sang in the Men’s Chorus, taught Sunday School, was a lifetime deacon, and member of the People of the Covenant Bible Study Group. His hobbies included bowling, golfing, and most of all, attending basketball games and watching college basketball on TV. He enjoyed farming from an early age until his early 80’s. It brought him great joy to be outdoors, planting and producing crops. He also raised cattle and had a layer chicken operation. Burial will be private and at the convenience of the family. All are invited to a Celebration of Life Service at The Florin Church of the Brethren on Saturday, September 25, 2021, at 5:00 p.m. Visitation will take place after the memorial service. The family is deeply appreciative of the dedicated nursing staff while he was a resident in The Courtyards and with the compassionate care of Hospice. We celebrate his life, our memories, and his love for Jesus. Memorial contributions can be made to the Florin Church of the Brethren, 815 Bruce Avenue, Mount Joy, PA 17552 or The Good Samaritan Fund, % Brethren Village, 3001 Lititz Pike, Lititz, PA 17543.

The family of Harry E. Hershey Jr. created this Life Tributes page to make it easy to share your memories.