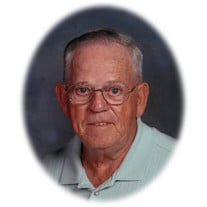 Harry O. Golden, 83 of Mount Joy, passed away on February 24, 2018.  He was the loving husband of Valera Johnson Golden.  Together they shared 62 years of marriage. Harry is survived by two children, Denise (Randy) Jackson of Mount Joy, and Brian (Donna Salah) Golden of Charlotte NC; three grandchildren: Angela (Robert) Sams, Kellen Golden and Matthew Jackson, two great grandchildren Keileigh and Ethan Sams. Harry began his career working for J.C. Snavely and Son as a carpenter.  He later learned the skill of drafting and then worked for RR Donnelley as a CAD designer.  He retired after 20 years of employment.  A longtime member of Trinity Lutheran Church of Mount Joy, Harry served as an usher and adult Sunday school teacher.  He was Past President and a very active member of the Mount Joy Lions Club, serving on various committees.  An avid golfer, Harry enjoyed trips to Myrtle Beach and other destinations with his golfing buddies.  A veteran of the PA National Guard, he served with the 28th Infantry Division, Company B for 3 years. Harry will be fondly remembered by family and friends for his good humor, kindness and willingness to help others in the community. He is also survived by his brothers Harold (Joyce) Golden of Elizabethtown, and Glenn of Iowa, and a sister Peggy Ebersole of Hummelstown.  He was preceded in death by his parents Clarence and Della Frick Golden, a brother Clarence and sister Shirley Monchak. A Funeral Service honoring Harry's life will be held at Trinity Lutheran Church, 47 West Main Street, Mount Joy on Thursday, March 1, 2018 at 11 AM.  Harry's family will receive friends from 10 to 11 AM.  Interment to follow a luncheon in Laurel Hill Memorial Gardens, Columbia PA.  If desired, memorial contributions to American Cancer Society, 314 Good Drive, Lancaster, PA 17603.  On line condolences may be sent through www.sheetzfuneralhome.com Sheetz Funeral Home, Mount Joy.

Harry O. Golden, 83 of Mount Joy, passed away on February 24, 2018.  He was the loving husband of Valera Johnson Golden.  Together they shared 62 years of marriage. Harry is survived by two children, Denise (Randy) Jackson of Mount Joy, and... View Obituary & Service Information

The family of Harry O. Golden created this Life Tributes page to make it easy to share your memories.