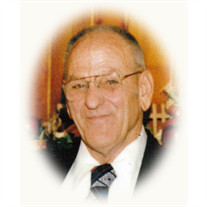 Harry J. Farmer, Jr., 92, passed away on January 21, 2018 at the Mennonite Home, Lancaster where he resided for the past 2 years.  Born in Lancaster County on Sept. 14, 1925 he lived in Mount Joy or Rheems most of his life.  He was the son of the late Harry and Edna (Kline) Farmer. He was married to the late Lilly Rosine (Kling) Farmer for 47 years and the late June B. (Johnson) Farmer for 21 years. Harry joined the Navy when he was 17 and served during WWII.  He was serving on the USS Lexington when it was hit by a torpedo in the Pacific.  The crew subsequently received the Presidential Unit Citation. From 1955 to 1958 he and Rosine ran "Farmer's Snack Bar" in what was then Florin. Harry worked for PPL for 39 years as a lineman, retiring in 1986. He and Rosine enjoyed traveling and visited most of the United States. Harry was a 50 plus year member of Glossbrenner United Methodist Church in Mount Joy, where he served as an usher, a greeter, and a trustee. He was a member of the Florin Fire Company and a Fire Policeman most of those years. Harry was a member of the Mount Joy Sportsman's Assoc., the American Legion, the Mount Joy VFW, and the PPL Retirement Assoc. Harry helped build the family hunting camps, Camp Kling in 1948 and later Camp Two Buck in 1955 and remained a member until his death. He loved hunting and teaching his daughters, grandchildren, and great children to hunt. Harry's other great love was bowling. He was a member of various bowling leagues in Lancaster County for over 50 years. He participated in many state tournaments. Harry also enjoyed playing pinochle and helping family members on various farms. He was also a volunteer for Meals on Wheels after his retirement. He greatly enjoyed spending time with his family and even learned to ski in his 60's. Harry is survived by two daughters, Connie L. Weber, wife of Kenneth of Bethany Beach, DE and Sharon L. Wolgemuth, wife of Ivan "Bud" of Mount Joy; five grandchildren Kyle Weber, Adam Weber, husband of Kimberly, Rob Wolgemuth, husband of Janine, Timothy Wolgemuth, husband of Tina and Angela Wolgemuth; and 10 great grandchildren: Matthew, Michael, Rachael, Jackson, Mitchell, Natalia, Tatyana, Travis, William and Ainsley. Harry will also be missed by June's four children, Rita Chappel, Walter Johnson, Deborah Runkle, and Jill Johnson and their families. He is survived by a sister Dorothy Berrier, brother Richard Farmer, husband of Esther plus many nieces and nephews. He was preceded in death by a brother John and two sisters, Catherine Waltz and Gladys "Dolly" Ney. A Funeral Service honoring Harry's life will be held at Glossbrenner United Methodist Church, 713 Church Street, Mount Joy, on Saturday, January 27th, 2018 at 3 PM.  Interment to follow in Camp Hill Cemetery, Mount Joy.  Harry's family will receive friends at the Church on Saturday from 1:30 to 3 PM. In lieu of flowers, memorial contributions to Glossbrenner UMC "Elevator Fund" 713 Church Street, Mount Joy PA 17552 would be deeply appreciated.

Harry J. Farmer, Jr., 92, passed away on January 21, 2018 at the Mennonite Home, Lancaster where he resided for the past 2 years.  Born in Lancaster County on Sept. 14, 1925 he lived in Mount Joy or Rheems most of his life.  He was the son of... View Obituary & Service Information

The family of Harry J. Farmer, Jr. created this Life Tributes page to make it easy to share your memories.