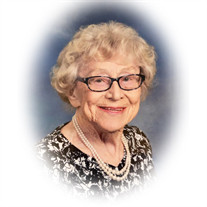 Grace B. Rohrbach, 94, passed away peacefully at the Mennonite Home on 4/19/2019.  Born in Longswamp Township, PA, she lived most of her life in North Wales, PA, moving to Lancaster County in 2009 after the death of her husband.  Grace was a resident at Woodcrest Villa for the past five years. She was married for 64 years to Carl D. Rohrbach who died in 2009.  She was the daughter of the late Charles and Gertie (Reinert) Shoemaker. Grace graduated from Kutztown High School in 1942.  She attended Allentown Business School and went on to hold various secretarial positions.  She married Carl Rohrbach in 1945 after he returned from service in WWII.  After Carl graduated from college in 1948, they moved to Milwaukee, WI where they lived for 2 years.  In 1950 they returned to PA as Carl took a job in Philadelphia.  They moved to the suburb of North Wales in 1955 where they raised their family and Grace became a full-time mom.  She was active in the local Women's Club and was a long-time active member of St Peter's Lutheran Church in North Wales.  She was devoted to her family and was beloved by her children, grandchildren and great grandchildren.  She enjoyed playing the piano, doing embroidery, and playing games.  Grace was proud of her Pennsylvania Dutch roots and large extended family in Berks County.  She will be remembered for her loving kindness and generosity. Grace will be deeply missed by daughter Lisa Nelson, of Landisville. In addition, she is survived by two granddaughters, Kacey Moore, married to Benjamin, of Elkins Park, PA, and Kara Barr, married to Zachary of Orlando, FL, and four great grandchildren, Keller and Juliette Moore, and Kensie and Ryder Barr. She was preceded in death by daughter, Carla Rohrbach, and sisters Pearl Balthaser and Mae Benson. A funeral service honoring Grace's life will be held at Zion Evangelical Lutheran Church, 85 East Brandt Blvd., Landisville on Saturday, April 27, 2019 at 12 noon. Family and friends will be received at the church before the service from 11 AM to 12 noon. Interment will be private at Longswamp Union Cemetery. In lieu of flowers, memorial contributions may be made to Hospice and Community Care, 685 Good Drive, PO Box 4125, Lancaster, PA 17604.

Grace B. Rohrbach, 94, passed away peacefully at the Mennonite Home on 4/19/2019.  Born in Longswamp Township, PA, she lived most of her life in North Wales, PA, moving to Lancaster County in 2009 after the death of her husband.  Grace was a... View Obituary & Service Information

The family of Grace B. Rohrbach created this Life Tributes page to make it easy to share your memories.

Grace B. Rohrbach, 94, passed away peacefully at the Mennonite...