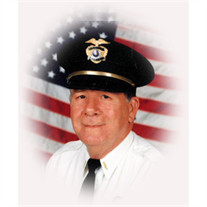 George R. "Dick" Shirk, 81, went to be with his Lord on Thursday, January 21, 2021, with his family by his side in Maytown.  Dick was the devoted husband for 60 years of the late Esther Rice Shirk, who passed in 2019.  He will be greatly missed by his children, JoNan Shirk and Barbara Ness (Shawn), both of Maytown, Jamey Shirk (Buffy) of Mount Joy and Jenniffer Smith (Erik) of Wrightsville.  His eight grandchildren will miss his daily presence and his sharing in all their activities and accomplishments.  Jessica, Derek, Ryan, Kaycee, Connor, Tanner, Canyon and Easton, and a great-granddaughter Lía Esther Boccagno.              Respectfully referred to as "Chief," Dick served as Chief of Police for the East Donegal Township Police Department from 1967 until his retirement in January 2002.  A lifelong resident of East Donegal Township, Chief had a caring and meaningful respect for the citizens he served.  In turn, he was loved by many in the Township and local districts.  Chief was instrumental in the formation of the Susquehanna Regional Police Department, an accomplishment of which he was very proud.   During his career, he made many friends and was an asset to his community and the Donegal Area.       Dick was raised in the Maytown area and often reflected positively on the toils of life in rural America during the "War Years."  As a young man, he was sent to work on local farms for the Draeger and Bixler families to support his own family.  He was a lifelong member of St. Johns Evangelical Lutheran Church of Maytown and a member of the Lancaster Co. Chiefs of Police Association as well as a former FOP member, and Ashara-Casiphia Masonic Lodge #551, Mount Joy.  A Jeep enthusiast, Dick and Esther loved to take drives throughout Lancaster and surrounding counties..."trying to get lost."  Each trip's common theme was "left turns only," which let them share many fun adventures.  A private family service will be held for "Chief" at his church, St. John's Evangelical Lutheran, on Monday afternoon.  Friends are welcome to share in an Honor Procession in his memory led by members of Lancaster County Police and Fire Departments at 4:30 PM on Queen Street, Maytown.  Chief's family would deeply appreciate memorial contributions to John's Lutheran Church, PO Box 96, Maytown, PA 17550.

George R. "Dick" Shirk, 81, went to be with his Lord on Thursday, January 21, 2021, with his family by his side in Maytown.  Dick was the devoted husband for 60 years of the late Esther Rice Shirk, who passed in 2019.  He will be greatly missed... View Obituary & Service Information

The family of George "Dick" R. Shirk created this Life Tributes page to make it easy to share your memories.