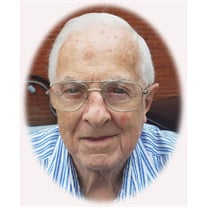 Frans Mast Sr., 89, of Lancaster, passed away peacefully on January 14, 2021. Frans was loving husband of Dorothy Brown Mast of Evergreen Estates, Lancaster. Together they celebrated their 58th wedding anniversary on March 10th 2020 . In addition to his wife Dorothy, Frans is survived by his four children; Connie wife of Tom Mara of Hershey; Linda wife of Bud Coleman of Lincoln University; Karin wife of Wayne DellaMaestra of Apex, NC; and Frans Jr. husband of Christy Mast of Wrightsville; eight grandchildren; Brittany Coleman of Parsippany, NJ, Colin and Andrew Mast both of Wrightsville, Jennifer Coleman of Washington, DC, Alex Coleman of Seattle, WA, twins Ethan & Jared DellaMaestra and Grace DellaMaestra all of Apex, NC.   Born in Schiedam, the Netherlands, in 1931, he was one of eight children born to the late Gabriel and Hendrika Mast. Frans immigrated from the Netherlands to Oxford, PA, in 1957, became an American citizen.  He was employed by Sears, Park City store where he worked in the catalog department for over twenty five years. Frans also delivered milk on a part time basis for the former Penn Dairies. After his retirement, Frans worked for the Sony outlet store in the Rockvale Square Outlet.             He was a longstanding member of First Presbyterian Church of Lancaster, where he sang in the choir. Frans loved to play chess and was a regular competitor at Lancaster Chess Club events.  Not only did he play at the Lancaster Club, he would also engage in virtual matches on the computer as well as through the mail with family and friends.   Frans enjoyed many other hobbies including astronomy, WWII history, computers, playing the organ, riding his bicycle, watching World Cup soccer, and listening to classical music.  His legacy of a full life will live on through his children and grandchildren and the many friends he made throughout his life.                 Services will be private and held at the convenience of the family. In lieu of flowers, please consider a donation to the Lancaster Symphony Orchestra in memory of Frans.   www.LancasterSymphony.org.

The family of Frans Mast Sr. created this Life Tributes page to make it easy to share your memories.

Frans Mast Sr., 89, of Lancaster, passed away peacefully on January...