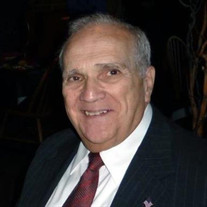 Franklin R. Eichler, 88, passed away on Monday, September 27, 2021. Born in Florin (now Mount Joy), he was the son of the late J. Donald and Ruth Shelly Eichler. He attended the Florin Primary/Grammar School, graduated from the former Mount Joy High School, class of 1952, and later graduated from Elizabethtown College in 1957. Frank joined The SICO Company, (Schock Independent Coal and Oil Co.) in 1955 and worked in a variety of positions included serving as President of the company for sixteen years, retiring on May 31, 1999. Following his retirement, Frank was a member of the Board of Directors of the parent company, First Mount Joy Corporation. In 1970, Frank became a board member of the Sico Foundation,(currently known as the Clarence Schock Foundation) a philanthropic non-profit organization in Mount Joy. His work involved being a Director and Treasurer of the Clarence Schock Foundation on a semi-retired basis and worked to promote the philosophy of its founder, Clarence Schock. As a Founding Chairman of the Clarence Schock Memorial Park at Governor Dick, located near Mt. Gretna, he served on its Board of Directors. The park remains part of the legacy of Clarence Schock, and the Board works to preserve the Deed of Trust, whereby the park is to be maintained in perpetuity as a playground and public park. Honored as a sixty-year-plus member of Glossbrenner United Methodist Church, Mount Joy, he served the church in various capacities. Most notably was his long-term role as Chairman of the Administrative Board. Active in the Mount Joy community, Frank served on the Mount Joy Borough Authority for twenty-four-years, including five years as Chairman, and was the former President and Treasurer of the Mount Joy Lions Club. In addition, Frank was the former President and Treasurer of the Milanof-Schock Library and served as Director and Vice Chairman of the former Union National Bank and Union National Financial Committee. Frank's devotion and commitment to serve his community was a lifelong endeavor that will be honored and remembered for years to come. He is survived by his wife of 24 years, Love Loy Zimmerman Eichler, two daughters; Victoria married to Randolph Dunham of TN; LuAnn married to Steve Baker of Manheim, his son David married to Margaret Mezaros Eichler of Mount Joy, stepson, J William Stekervetz of Middletown, seven grandchildren and eight great-grandchildren. Also surviving is his sister, Norma, married to Whip Derr of Lancaster. Frank was preceded in death by his first wife, Patricia Brooks Eichler, in 1994, to whom he was married for 39 years and three brothers, Donald and James Eichler, and Ralph Sauders. A memorial service honoring Frank’s life will be held on Saturday, October 30, 2021 at Glossbrenner United Methodist Church, 713 Church Street, Mount Joy at 11 AM. Contributions to Rainbows End Youth Services REYS, 105 Fairview Street, Mount Joy PA, 17552 would be deeply appreciated. To watch the live stream of Frank's service please visit https://www.youtube.com/watch?v=GIlIiV5H8Ho

Franklin R. Eichler, 88, passed away on Monday, September 27, 2021. Born in Florin (now Mount Joy), he was the son of the late J. Donald and Ruth Shelly Eichler. He attended the Florin Primary/Grammar School, graduated from the former Mount... View Obituary & Service Information

Community Advocate and Past President of the SICO Company, Mount Joy