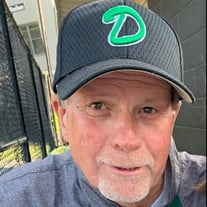 Surrounded by his loving family, Eugene H. “Gene” McComsey, 72, of Mount Joy, passed away on Monday, March 28, 2022, at his home. Known as “dad”, “pap”, “coach” or just “McComsey” - - Gene has inspired all of us to simply “do our best” - - on and off the softball field. Gene showed his “best” to his immediate family when he was diagnosed with stage-4 lung cancer in 2018. When many may crumble or fall apart with such an unforgiving diagnosis, Gene was practical, stoic and brave. He embraced the facts and made a clear, conscious decision that he would quietly fight and live out his days with as much buoyancy for life, humor and normalcy as he always had. During this private journey, he continued; to play basketball with his friends, whom he was so fond of, gardening, working on tasks at the cabin with his brother, Richard, (beloved Uncle Pie), helping his granddaughter with afterschool activities and math homework, walking and talking in the mountains with his daughters and Ruby (grand-puppy), and riding around in the VW, and acting like a young kid with the love of his life, Diane (Dolly). His passion to coach softball and mentor hundreds of young women throughout his career, was second to none. Inspired by his daughter Gwendolyn, Gene stepped onto the field 35-years ago…and never looked back. His coaching career included a variety of Mount Joy Athletic Association teams: The Fillies (pee wee), pre-teen and Mount Joy Blue (teeners). Additionally, he coached Hempfield Black Knights (teener), Mosby’s Pub (women’s league), Lancaster Catholic Crusaders (varsity), and most recently, the varsity team for the Donegal Indians. Gene was a graduate of Hempfield High School, class of 1967. He retired from Alcoa in 2009. Born in Columbia, he was the son of the late Ludwig M. and Ada (Reikard) McComsey. Gene was the husband of Diane L. (Kryder) McComsey with whom he celebrated 52 years of marriage. Surviving in addition to his wife, Diane, are two daughters; Cynthia L. McComsey of Maytown and Gwendolyn L. McComsey of Lancaster; a granddaughter, Soul L. McComsey of Lancaster; and a brother, Richard C. McComsey of Columbia. He was preceded in death by a brother, Robert E. McComsey. A memorial service honoring the life of Eugene H. McComsey will be held at the Donegal Varsity Softball Field, 915 Anderson Ferry Road, Mount Joy on Sunday, May 22, 2022 at 3 PM. Family and friends will be received at the field before the service from 2 PM to 3 PM. Fellowship will follow the service at the Marietta Community House, 264 West Market Street, Marietta. In lieu of flowers, memorial contributions may be made to the Gene McComsey Memorial Scholarship Fund. The annual scholarship will benefit a DHS softball player with continuing education. Checks should be payable to the Gene McComsey Memorial Scholarship and mailed to The Donegal Foundation, PO Box 495 Mount Joy, PA 17552.

The family of Eugene H. "Gene" McComsey created this Life Tributes page to make it easy to share your memories.