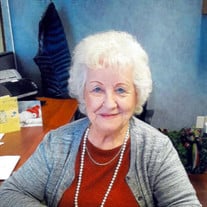 Dorothy L. “Pat” Goguen, 89, of Mount Joy, entered the presence of her Savior on Saturday, August 14, 2021. Born in Fitchburg, Massachusetts, Pat was the daughter of the late Arlie and Lillian (Lillstrang) Wiita. She was the wife of the late Joseph A. Goguen, who passed away in 1996. Pat was predeceased by her sister and brother-in-law Arlene and John Maret. She will be greatly missed by her three children: Deborah A. (Charles) Hartman, of Mount Joy; John W. (Kathleen) Goguen, of New York; and Lori J. (Phillip) Bodkin of Maryland; seven grandchildren; eleven great-grandchildren; and one great-great-grandson; a brother David (Vangie) Wiita, of the Philippines; and two sisters Bette (Henry) Hamel, of Massachusetts; and Janice Johnson, of Washington State; and her many nieces and nephews. Pat graduated from Ashby High School in Ashby, Massachusetts in 1950 and graduated from Moody Bible Institute in Chicago, Illinois in 1952. She worked for the North Middlesex Regional High School in Townsend, Massachusetts, as the school secretary retiring from there in 1985. After moving to Pennsylvania, she worked briefly for the Jay Group in Ronks and Significa Insurance in Lititz. She stopped working in 2017, just shy of her 86th birthday. Pat and Joe loved to visit their cabin in Shediac, New Brunswick, Canada, which they did for many summers. One of her greatest joys was spending time with her family. Pat’s faith and love for the Lord Jesus was a vital part of her life that she gladly shared with others. She passed on this beautiful Christian legacy to her children, grandchildren and great grandchildren. While living in Massachusetts, she was a member of First Baptist Church of Groton where she sang in the choir and in a Ladies Ensemble. Later, after moving to Gardner, she became a member of First Baptist Church of Westminster, where she taught Sunday School. Pat attended Community Bible Church in Marietta after moving to Pennsylvania in 2007. While Pat’s family deeply grieves her loss, they rejoice in the sure hope of being with her in Heaven one day! “For God so loved the world, that He gave His only Son, so that everyone who believes in Him will not perish but have eternal life.” John 3:16. A Memorial Service celebrating Pat’s life will be held September 18, 2021, 11 AM, at Community Bible Church, Anderson Ferry Road, Marietta, PA. A Graveside service will be held on October 2, 2021, 10 AM, at the Groton Cemetery, 245 Hollis Street, Groton, MA. In lieu of flowers, memorial contributions can be made to Gideon’s International, c/o Jesse Peters, 2222 Town Square North, Manheim, PA 17545.

Dorothy L. &#8220;Pat&#8221; Goguen, 89, of Mount Joy, entered the presence of her Savior on Saturday, August 14, 2021. Born in Fitchburg, Massachusetts, Pat was the daughter of the late Arlie and Lillian (Lillstrang) Wiita. She was the wife... View Obituary & Service Information

The family of Dorothy L. "Pat" Goguen created this Life Tributes page to make it easy to share your memories.