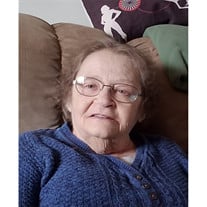 Dorothy M. Allen, 76, of Mount Joy, passed away on Monday, April 19, 2021 at Susquehanna Valley Nursing and Rehabilitation Center. Born in Lancaster, she was the daughter of the late George A. and Esther (Ney) Shirk. Dorothy was the wife of the late David L. Allen who passed away on September 5, 2004.                 Dorothy was a graduate of Donegal High School class of 1964. She was a member of St. Marks United Methodist Church in Mount Joy.  Until recently she was an active member of the church choir and loved listening to music and watching old movies.  She enjoyed spending time with friends at church events and playing bingo at the Elizabethtown Area Senior Center.  To her time well spent meant spending it with family.  She was particularly fond of "running around" with her sister Pauline to shop and talk about life.  Friday evenings were not complete if they didn't include a trip out to eat with her son's family, followed by browsing at a local bookstore for a good story to read.                In her younger years, Dorothy enjoyed taking family vacations to the seashore, which supplied many fond memories.  As a mother, she gave all of herself to raising her children - Todd & Amanda.  She cherished every moment she could get with her grandkids.  To her, family was the most important thing about life - family was life.                 Dorothy is survived by two children, Todd Allen, husband of Kelly of Mount Joy and Amanda Reed, wife of Jeffrey of Lancaster; two grandchildren, Amara Reed and Jayden Allen; and a sister, Pauline Johns, wife of Charles of Maytown.                 She was preceded in death by four brothers, John Paul, James R., Charles R. "Bob", and George R. "Dick" Shirk; and two sisters, Helen Broucht and Jean Weaver.                 Services will be announced at a later date. In lieu of flowers, memorial contributions may be sent to St. Mark's United Methodist Church, 37 East Main St, Mount Joy, PA 17552 .

Dorothy M. Allen, 76, of Mount Joy, passed away on Monday, April 19, 2021 at Susquehanna Valley Nursing and Rehabilitation Center. Born in Lancaster, she was the daughter of the late George A. and Esther (Ney) Shirk. Dorothy was the wife of... View Obituary & Service Information

The family of Dorothy M. Allen created this Life Tributes page to make it easy to share your memories.