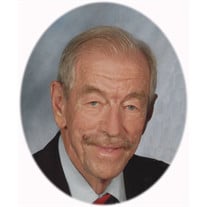 Donald R. Witmer, age 94, of Willow Street, PA, passed away on Tuesday, August 6, 2019 at the Mennonite Home. He was preceded in death by his wife Catherine A. Ney Witmer on September 14, 2012. Born in Lancaster on September 11, 1924, he was the only child of the late Landis M. and Miriam A. Young Witmer. Donald was a 1942 graduate of McCaskey High School. A proud veteran of World War II, Donald served in the Navy as a torpedo man aboard the U.S.S. Twiggs (DD-591), which joined the Pacific Fleet in 1944. The ship was damaged by a kamakaze strike in April 1945, was repaired, and then suffered a direct hit on June 16, 1945 while on radar picket duty off Okinawa. The ship sank within an hour and Donald was one of the 188 survivors. He was awarded the Purple Heart for his bravery. Donald's historical account of the battle has been preserved in the Naval Historical Foundation. After the war, he worked as a master electrician at Armstrong World Industries for over 40 years. After retirement he enjoyed traveling, gardening, swimming, golfing, and spending time with family and friends. He was kind and generous, thoughtful and curious, and lived independently up until a month before his death. Donald was a faithful member of First Presbyterian Church of Lancaster. A memorial Service celebrating Donald's life will be held at the First Presbyterian Church of Lancaster, 140 East Orange Street, Lancaster, PA on Saturday, September 7, 2019, at 3:00 PM. There will be a private interment with full military honors at the Greenwood Cemetery, Lancaster PA. In lieu of flowers, the family requests that gifts be made to the Lancaster County Food Hub, 812 N. Queen Street, Lancaster PA.  17603 or online at www.lancasterfoodhub.org or the DAV- Disabled American Veterans, P.O. Box 14301, Cincinnati, OH45250-0301 or online at www.dav.org .

The family of Donald R. Witmer created this Life Tributes page to make it easy to share your memories.