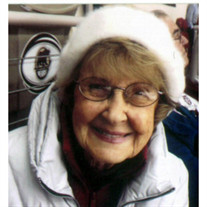 Dottie Smith Doris J. Smith, 95, of Elizabethtown passed away on June 5th, 2016. She was the loving wife of the late "Kenny" Smith Sr., who died in 2000. Dottie will be missed by her son Kenneth A. (Mary Ann Watcher) Smith, Jr., of Mount Joy, and two grandchildren, Capt. Jeffrey L. Forry, Jr., US Army, married to Maj. Joelle Quiapo Forry, US Army, of Georgia, and Amanda F. Smith of Norfolk, Virginia and a great granddaughter Jaslynn Raine Forry. Dottie grew up in Northfield, NJ and moved to Elizabethtown in her senior year of high school where she was involved in cheerleading and was crowned the very first May Queen in school history. Dottie and Kenny were introduced on a blind date while he was at a Boston Bruins training camp in Hershey. The couple married in 1946 and Dottie became a life-long passionate hockey fan following Kenny while he played with the Boston Bruins and later for the Hershey Bears. After Ken's retirement from playing professional hockey, the couple opened Smith's Beverage Distributor in Mount Joy. During the 1970's, Dottie, Kenny and Ken Jr., established Kenny Smith Sporting Goods which was later known as The Sharp Edge in Mount Joy, dealing with all things hockey. She and Ken would continue their love of the sport through the Bruins Alumni Association and as owner and coach of the Hershey Jr. Icers. Through all the years, Dottie was the one of the Hershey Bears greatest fans. As long as she could drive, or someone would drive her, she would attend the games and cheer on the Bears with great pride. Dottie will be fondly remembered for her never-ending smile, her strong bonds of friendship and that special twinkle in her eyes. Born in Enola, she was the daughter of the late Francis and Hazel Hutter. She was preceded in death by her brother Frank L. Hutter, Jr, and is survived by a brother Robert E. Hutter of New Hampshire. A Memorial Service honoring Dottie's life will be held at Glossbrenner United Methodist Church, Church and Angle Street, Mount Joy PA on Saturday, June 11, 2016 at 1 PM with the Reverend Timothy Anderman officiating. Dottie's family will receive friends at the church from 12 to 1PM. Interment will be private in the Mount Joy Cemetery. In lieu of flowers, memorial contributions to www.hockeyfightscancer.com would be deeply appreciated by her family.

Dottie Smith Doris J. Smith, 95, of Elizabethtown passed away on June 5th, 2016. She was the loving wife of the late "Kenny" Smith Sr., who died in 2000. Dottie will be missed by her son Kenneth A. (Mary Ann Watcher) Smith, Jr., of Mount Joy,... View Obituary & Service Information

The family of DORIS J. SMITH created this Life Tributes page to make it easy to share your memories.