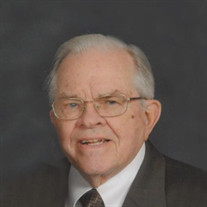 C. Bernerd Grissinger, our beloved Dad, Grandpa, and Great Grandpa, left this world peacefully to be with the Lord on March 30, 2022. He is now living forever in eternal glory along with his wife of 63 years, Margaret, who preceded him in death in 2016. He is survived by three daughters – Linda Grissinger of Laguna Niguel, California, Gail Steinweg (Paul) of Lititz, and Dr. Sharon Grissinger (Bob Harmon) of Malvern. He is also survived by two grandchildren – Brad Steinweg (Valerie) of Lancaster, and Erin Collins (Garrett) of Perryville, Maryland and one great grandson, Landon, of Lancaster. Bernerd was the only child of the late Clarence and Vesta (Brubaker) Grissinger. Born in Lancaster in 1926, he was a 1944 graduate of the former Mount Joy High School. In 1945, he joined the Army to serve his country in WW2. He was granted an honorable discharge in 1946 and returned to Elizabethtown College where he earned his B.A. in Business Administration in 1950. Post-graduation, Bernerd joined the accounting firm of Hatter Harris & Beittel (Lancaster); two years later, he was offered the position of Manager of Plant Operations at Bachman Chocolate in Mount Joy. He was promoted to Treasurer in 1964 and successfully led the company through three mergers until his retirement in 1984. Most importantly though, our Dad’s life was dedicated to giving and serving – serving God, his family, and his community. He had a strong faith, solid values, and a positive approach to everything. His greatest joy was spending time with his family. He was a member of St. Mark’s United Methodist Church for 83 years and served many years as Treasurer, member of the Finance Team, and overseer of church audits. He served as a Director of the Union National Mount Joy Bank from 1970 – 1996 and was its Vice Chairman from 1993-1996. Additionally, he worked as a Business Development Officer and later as a commercial/residential property inspector for the Bank until he was 87. He was President of the Mount Joy Library Board of Directors and spearheaded the construction of the new Milanof Shock Library in 1999. He was Chairman of the Mount Joy Borough Authority, President of Mount Joy Meals on Wheels, Past Master of the Casiphia Masonic Lodge No. 551, member of the Mount Joy Water Authority, member of the American Legion and Emergency Medical Service Volunteer. He did so much for his community that the Mayor, in appreciation, proclaimed Saturday, February 8, 1997, as “C. Bernerd Grissinger Day” for the Borough of Mount Joy. A Memorial Service celebrating Bernerd’s life will be held at St. Mark’s United Methodist Church, 37 East Main Street, Mount Joy, PA on Friday, May 6, 2022 at 11 AM. In lieu of flowers, memorial contributions can be made to Mount Joy Library, 1184 Anderson Ferry Rd, Mount Joy, PA 17552 or to Hospice & Community Care, 685 Good Drive, Lancaster, PA 17604.

C. Bernerd Grissinger, our beloved Dad, Grandpa, and Great Grandpa, left this world peacefully to be with the Lord on March 30, 2022. He is now living forever in eternal glory along with his wife of 63 years, Margaret, who preceded him in death... View Obituary & Service Information

The family of C. Bernerd Grissinger created this Life Tributes page to make it easy to share your memories.