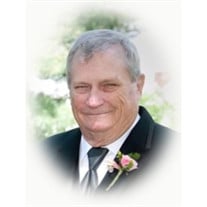 Barry W. Etsell, 73, of Mount Joy, passed away on Tuesday, October 22, 2019.  Barry was the loving husband of Marilyn (Wenger) Etsell with whom he celebrated 51 years of marriage on June 1st. Also surviving are two children, Scott married to Tara (Hallacher) Etsell, Krissy Hitz fiancé of Marty Mullen, both of Mount Joy, a granddaughter, Cora (John) Weaver, of Athens, GA; a great grandson, Avery Weaver; and a sister, Kitty (Tom) Harmes, of Ft. Myers Beach, FL. Born in Lancaster, he was the son of the late Charles and Fannie (Mateer) Etsell. He was preceded in death by a son in law Todd Hitz.                 A lifelong resident of Mount Joy, Barry was a proud graduate of Donegal High School class of 1964. As a young man, Barry was one of the Charter Members of the Mount Joy Athletic Association which was a grassroots organization to bring structured youth baseball to the Mount Joy Community.  During this time, he coached his son as well as notable MLB players including Bruce Sutter, Mitch and Craig Johnson, Mike Sarbaugh and Kris Harmes.  He was inducted in the Donegal High School Athletic Hall of Fame along with the 1963 football team and was honored for his continued dedication to the MJAA at the 50th Anniversary Celebration in June.  He was a member of St. Marks United Methodist Church, and enjoyed hunting and trips to the family cabin, PhaRuth.  Barry and Marilyn are avid Penn State fans and have held season tickets for 48 years.  Barry's lifelong commitment to the MJAA area baseball will live on in the hearts of the players he coached.                 A Memorial Service honoring Barry's life will be held at the Mount Joy Mennonite Church, 320 Musser Road, Mount Joy on Thursday, October 31, 2019 at 11 AM. Family and friends will be received immediately following the service. Interment will be private in the Mount Joy Cemetery. In lieu of flowers, Barry would like all memorial contributions go to Mount Joy Athletic Association, PO Box 584, Mount Joy, PA 17552, to continue his life's work.

Barry W. Etsell, 73, of Mount Joy, passed away on Tuesday, October 22, 2019.  Barry was the loving husband of Marilyn (Wenger) Etsell with whom he celebrated 51 years of marriage on June 1st. Also surviving are two children, Scott married to... View Obituary & Service Information

The family of Barry W. Etsell created this Life Tributes page to make it easy to share your memories.