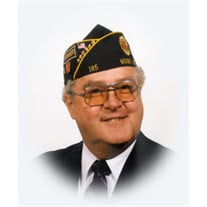 Albert W. Whalen of Mount Joy, PA passed away, surrounded by family, on Tuesday April 6, 2021 at the Masonic Village Health Care Center in Elizabethtown, PA.  He was born in Pottsville, PA son of the late Albert and Marie (Ernst) Whalen. In addition to his beloved wife of 64 years, June (Heinaman), Albert is survived by his daughter Kim Whalen (Joel Barch), son Scott Whalen, (Brenda Billet), his granddaughter Marisa Whalen and sister Doris (Whalen) Mayberry. He graduated from Minersville High School in 1950.  As quarterback, Albert led the 1949 Minersville football team to the Eastern Conference Championship defeating Old Forge.   He earned a degree from Elizabethtown College in Business Administration and was also a graduate of Lancaster Business School.   Albert proudly served his country, with honor, in the U. S. Army during the Korean Conflict.  He served with the Combat Engineers attaining the rank of Staff Sergeant. He began his professional career at RCA's Lancaster Plant before retiring after 38 years of dedicated service to RCA as Superintendent of Plant Facilities in 1993. Albert was a Life Member and Past Commander of the Walter S. Ebersole American Legion Post 185 in Mount Joy.  He received the distinguished honor of District 10 Commander of the Year in 1987 and 2009.  He held Life Memberships in the VFW Post 5752 in Mount Joy, Mount Joy Sportsman's Association, Mount Joy Fire Department, The Lancaster Liederkranz, Casiphia Lodge 551, Lancaster Lodge of Perfection, Harrisburg Consistory and Tall Cedars of Lebanon-Lancaster Forest 27.  He was also a proud member of the 11 Gallon Club at the former St. Joseph's Hospital in Lancaster, PA.  He was Grand Marshall of the 2014 Mount Joy Memorial Day Parade and proudly supported his brethren in the military and first responders. He loved his family, spending winters with his wife June in Hilton Head Island, SC, chocolate chip cookies and the Philadelphia Eagles.  He was thrilled to have lived long enough to watch his Philadelphia Eagles soar to victory in Super Bowl LII in 2018. He was a member of Glossbrenner United Methodist Church in Mount Joy.  Albert is preceded in death by his parents and his brother Walter Whalen.  Interment will be private, at a later date.  In lieu of flowers, memorial contributions may be made to the VFW Post 5752, 125 Longenecker Road Mount Joy PA. 17552.

Albert W. Whalen of Mount Joy, PA passed away, surrounded by family, on Tuesday April 6, 2021 at the Masonic Village Health Care Center in Elizabethtown, PA.  He was born in Pottsville, PA son of the late Albert and Marie (Ernst) Whalen. In... View Obituary & Service Information

The family of Albert W. Whalen created this Life Tributes page to make it easy to share your memories.