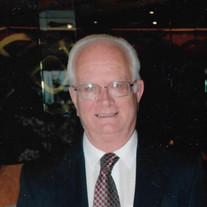 Alan William Emerson, 80, faithful husband to Laurel Gardner Emerson, was ushered into Jesus’s presence on Thursday morning, June 9, 2022. Alan and Laurel were married for 55 years. Alan is survived by four children: Kimberly Mays, Kristen James (and husband Henry James), Kara Werner (and husband Steve Werner) and Paul Emerson (and wife Alina Emerson). Alan graduated from Nyack College in 1966. He served as a pastor in an Alliance Church and as a high school teacher in West Haven, Connecticut from 1966-1969, and continued teaching junior high and high school from 1969-1978 in Easton, Massachusetts. He moved the family west to Washington State from 1978 until 1988, where he owned a nursing and care facility, Christopher House, for elderly and handicapped residents. The family moved to Pennsylvania in 1988, where Alan worked for H&S Food Distributors until 1994, then owned Emerson’s Cleaning, Inc. until 1999. Alan’s last role was as a custodian at Lampeter-Strasburg School District until he retired in 2010. Alan’s main joy in life was being a companion to Laurel. Together they cared for 82 foster children through the years. He enjoyed helping Laurel buy and renovate homes, as they did not like to stay in one place for too long. He also loved sports. He enjoyed coaching and refereeing soccer and playing softball in his younger years. He was an avid Patriots, Red Sox, Celtics and Bruins fan. Alan is also survived by ten grandchildren: Jayson Emerson, Kacey and Shawn Mays, Justin and Tyler James, Hannah and Alyssa Werner, and Kaya, Chloe, and Malakai Emerson. He is survived by three great-grandchildren: Skyler, Briella, and Kylie. A memorial service honoring Alan’s life will be held at the Alliance Church, 425 Cloverleaf Road, Elizabethtown, PA 17022 on Saturday, June 25, 2022 at 11 AM. Family and friends will be received at the church before the service from 10 AM to 11 AM. Interment will be private. In lieu of flowers, memorial contributions may be made to Christian and Missionary Alliance, One Alliance Place, Reynoldsville, OH 43068 ( https://secure.cmalliance.org/give/ ).

The family of Alan William Emerson created this Life Tributes page to make it easy to share your memories.